FORT COLLINS -- The average U.S. consumer takes it for granted that the coffeemaker will begin brewing at the flip of a switch. Yet bringing power to the people is a complex enterprise.

And it's becoming even more so due to aging infrastructure, rising security threats, burgeoning environmental concerns and a growing network of energy entrepreneurs. Yet there was a palpable current of excitement during Smart Grid Live 2012, an international energy conference held this week in Fort Collins.

Approximately 325 industry experts convened at the Lincoln Center, Sept. 25-27, to illuminate the best and brightest ideas of how to light up our lives more efficiently, economically and sustainably. The concept of a "smart grid" is a reality, confirmed event organizer Sunil Cherian. "This thing is real, it's here today, and it has nothing to do with (smart) meters," he said. 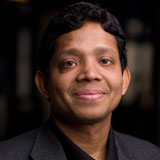 Cherian, CEO of Spirae, got an obvious charge out of bringing together colleagues from all over the world to do more than just talk about changes in the electrical grid. The conference's "LIVE" component brought a whole new dimension to the proceedings and gave literal meaning to the term power point presentation.  Speakers relied on engineering and information teams onsite and remotely to show real smart grid systems in action.

"We had 60 participants in all the demonstrations, and they were all supported behind the scenes in their respective offices," Cherian said. "To get all that to come together and work as seamlessly as it did was just phenomenal."

For Henrik Bindner, a research group leader with the Technical University of Denmark, this meant connecting to the DK Distributed Energy Systems PowerLab half-way round the globe.  Attendees were able to watch the island of Bornholm's flexible smart grid system automatically monitoring, detecting and rerouting energy to meet flow demands. Binder also inserted a test glitch into one sector so the audience could see the system quickly identify and correct the error.

For Diane Broad, managing director for Ecofys US, a sustainable energy consulting firm, the opportunity to see real systems in action was a definite draw.

"I would really commend the group for doing live demonstrations because the proof is in the pudding," Broad said. Of special interest to her was the demo by the Sacramento Utility District for an area of homes that has a high penetration of solar.

"SMUD has been a real leader in the U.S. in terms of adopting innovative practices as a utility and also with their renewable energy goals," she said. "That project in particular was a good indication of what most utilities will probably be inclined to do, even though I'm not sure I agree 100 percent with the direction they're taking."

One of Broad's concerns is the continued high cost of storage batteries.

"Everything has its time," she said. "I think the smart grid approach, and maintaining a lot of flexibility--even in just the way we understand and operate the assets we have right now--shows a lot of promise. To me, the smart grid is a vehicle to get us to our environmental goals."

Industry analyst Peter Asmus with Pike Research/Navigant moderated a panel discussion on the role that "microgrids" will play in our energy future. Currently, more than 300 microgrid projects in the U.S. are in development, he said, and are taking many forms. They may encompass cooperative neighborhoods, individual businesses, large institutions such as universities or hospitals, or entire communities or regions. Most are designed to interconnect and feed back into larger grids, while others may be isolated energy "islands."

The prudence in developing microgrids and energy islands isn't new. Many military bases and hospitals have long had back-up generators and systems to draw upon in case of emergencies or problems in the main grid. Last summer, an energy blackout in India affected more than 620 million people when three government-operated grids failed. A decentralized microgrid system may have circumvented this scenario.

The panel addressed a multitude of challenges surrounding these small-scale energy enterprises, not the least among them being security issues. As more renewable energy sources start coming online and feeding back into main grids, they're generating headaches for utilities operators, many with aging infrastructure not designed to handle the two-directional power flow.

But as the engineering community in attendance pointed out, there are solutions to every problem. What's more, they're up for the challenge.

As event organizer, Cherian said he was rewarded by the many unique perspectives that emerged from the gathering.

"Initially I thought, O.K., these are the three main take-away messages from the conference," he said. "What I'm finding is there are 300 takeaways, and 297 of them I didn't anticipate. They're all good. I was absolutely delighted with that."