LOVELAND - At Numerica Corp., it's all about having some of the best minds in America putting their thinking caps on every day to advance the company's mission of dissecting and solving extremely complex problems.

That includes giving Numerica's staff of 50-plus employees four hours of "Dabble Time" every week - essentially creative free time to work on whatever they want. 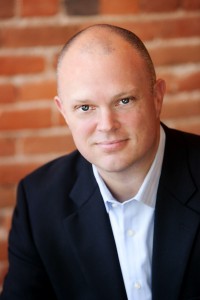 "They can work on something really without restriction," said Jeff Poore, Numerica's president. "We want (the Dabble Time) to have some impact, but we won't micromanage it."

Poore, who started his career as a construction project manager, has run the company since 1998 when his father, Aubrey, asked him to take over contract management of the business he founded.

Poore said giving super-smart people some leeway in their work has paid dividends.

"It's amazing," he said. "When you ask people to act in the company's interest, they do. It's good for the company because Dabble Time is our (idea) pipeline."

Numerica is named after the mathematical term numerical which, according to the dictionary, means "of or pertaining to numbers," and numbers get endlessly tossed around in the creation of complex algorithms that are the company's bread and butter.

Mostly, Numerica works for the U.S. government and its various intelligence and defense departments.

For example, Numerica works with the Air Force to track and identify all objects, including ever-increasing space junk floating around the Earth.

"How do you help those satellites navigate an increasingly cluttered environment?" said Poore. "That whole area of estimating the present an future location of space objects is something we do very well."

Becky Jensen, Numerica's marketing manager, said space sensors can now track objects the circumference of a grapefruit, but advances in sensor technology will soon enable them to track objects as small as a penny.

Numerica has been hitting several contract home runs this year, most recently winning a $900,000 contract in late July with the Navy to develop resource scheduling algorithms to help battle groups optimize their force effectiveness.

Since 2002, Numerica has been awarded more than 75 SBIR contracts worth more than $31 million. Over the last six years, Numerica experienced 170 percent revenue growth.

Poore said the company has developed core specialties focused mainly on defense needs. But he said he sees the company diversifying its information products through new "greenhouse" research efforts in such areas as crime analytics and financial markets.

"The defense domain presents some really interesting problems, but now we want to know how we can grow horizontally," he said. 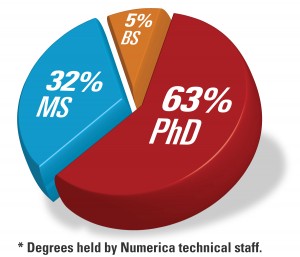 That gets back to recruiting top-level research and computational scientists - never an easy task. Poore acknowledges that gaining security clearances and the competition out there for these people limits how fast the company can grow and how many big assignments it can take on.

"We've been constantly looking (for the best employees) for the last 16 years," he said. "We're a slow-growth business because of the number of qualified people we can recruit and hire at any given time."

"We want the cream of the crop, and that's who we get," said Jensen. "But the people we hire have to go through a very rigorous interview process."

Jensen noted that 14 of the company's 52 current employees are Colorado State University graduates.

But most are PhD.-level graduates of such revered institutions as Harvard, CalTech, Princeton and MIT.

Poore said being in Colorado helps with recruitment, with the state's obvious climate and scenery attractions and its green-and-fit ethic.

But the company also goes the extra mile to encourage an informal, family-friendly work environment and give employees an opportunity to work on projects they feel can make a difference in the world.

And there's also a bit of esprit de corps of talented people working with talented peers that's attractive, too, he notes.

"I'm really fortunate to be able to work with such a talented group of people," he said. "I really feel there's nothing we can't do."