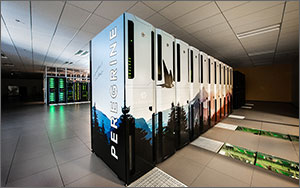 GOLDEN -A supercomputer created by HP and the National Renewable Energy Laboratory (NREL) that uses warm water to cool its servers and reuses that water to heat its building has been honored as one of the top tech innovations of the year by R&D Magazine.

"Our vision was to build a showcase facility, to integrate the computer and data center with the building and do it with a holistic view toward energy efficiency."

The result is the high-performance computer called Peregrine at NREL's Energy Systems Integration Facility (ESIF). Peregrine is the first installation of the HP Apollo 8000 platform, which uses more than 31,000 Intel Xeon processors with a total capacity of 1.19 petaflops.

NREL said Peregrine generates enough heat to meet the needs of the 182,500-square-foort ESIF, and combined with an energy-efficient data center is saving NREL about $1 million a year in energy costs.

In all, the ESIF consumes 74 percent less energy than the national average for office buildings and was designated a LEED Platinum building.

R&D Magazine named ESIF the 2014 Laboratory of the Year.