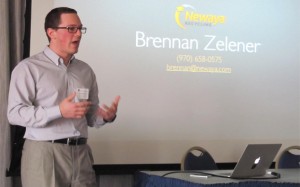 GREELEY - Brennan Zelener is looking for money to help him scale up his fledgling cell phone recycling business.

John "Grizz" Deal would like to find some investment in his company's technology that can purify water produced from oil-and-gas drilling operations.

And Bill Gillette has an idea for a deployable smart fuel system for vehicles that service field operations far from refueling stations, but he needs some cash to help fund a prototype.

The three entrepreneurs' startups were among 18 companies that pitched their business concepts Wednesday to judges at the 2014 Monfort Entrepreneurial Challenge at the University of Northern Colorado.

The day-long event featured 15-minute presentations by each of the companies, which were selected from 30 applicants, according to David Thomas, UNC assistant professor and Challenge director.

Now in its fifth year, the Monfort College of Business Entrepreneurial Challenge offers $50,000 in prize money to be split by the top three companies selected during a final pitch competition to be held March 25 at the KUSA-TV (9News) studio in Denver.

Thomas said judges at Wednesday's preliminary challenge will select five finalists who will take part in the final pitch competition.

The names of those finalists will be released early next week, Thomas said.

Those taking part in the Monfort competition are Colorado-based "stage 1 startup" companies that have not yet realized much or any revenue, he said.

"We want to help people get out of their garages," Thomas said. "We're trying to help these small businesses and help the economy of Northern Colorado and the state."

This year's selected preliminary companies ran the gamut from a company that has a social platform that links art institutions and art lovers to a company that produces gourmet lettuces and green vegetables in greenhouses that utilize renewable energy sources.

Thomas acknowledged it was an eclectic collection of startups.

"It happened to be just the luck of the draw," he said. "They were the best."

Thomas said the caliber of this year's selected companies was outstanding.

"The big change we've seen over the last few years has been the quality," he said. "It's really improved."

Click to view the following funding pitch videos below.

great article. your publication ends up in our classes as a valuable learning tool for students. thanks