LOVELAND - About 50 representatives of local robotics and unmanned aviation systems (UAS) companies and firms that service them were able to connect with resources Wednesday that could help expand their businesses as part of the City of Loveland's Tech Transfer program, now in its second year. 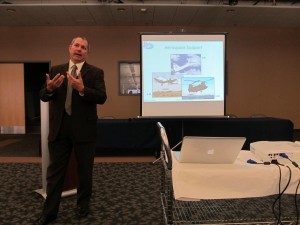 Dave Lung, founder of Longmont-based DA2 Consulting and project director for the tech transfer program, said the workshop - focused on UAS, robotics and intelligent systems technology - is the first of a series planned for 2013.

Lung said the first year of the tech transfer program identified many of the existing technologies in the Loveland area and revealed a significant robotics-related industry group.

This year, Lung said, the program will focus more on workshops that home in on specific technology areas and startup issues. A second workshop on accessing financing is planned for late June, he said.

Wednesday's workshop speakers on robotics included Roger Lopez, director of the Autonomous Systems and Controls Division at Southwest Research Institute in San Antonio; Brian Argrow, director of CU-Boulder's Research and Engineering Center for Unmanned Vehicles; and Stan VanderWerf, a retired Air Force officer and proposal manager for Colorado's Team UAS proposal to the FAA to have the state designated a test site for UAS research.

Lopez said the Southwest Research Institute, established in 1947, helps businesses move their products into the marketplace.

"We're an R&D facility," he said. "We're trying to take innovation from innovative small businesses and figure out how we can commercialize that."

Lopez said the Institute has been working on the development of UAS's since 1994 and has a robotic test facility on its 1,200-acre site.

Argrow said CU-Boulder has been building UAS prototypes and testing them at its Table Mountain test site near Boulder.

"You may not know this, but here in Colorado we have the distinction of having flown UAS's from Alaska to Antarctica," he said.

VanderWerf said he's leading a statewide team to get the FAA to designate Colorado as a UAS test site. He said the state is becoming known for its UAS research and production. 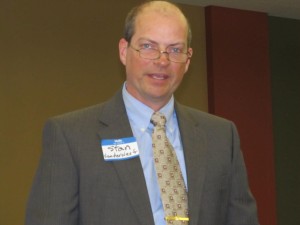 "It's predicted by 2025 that the UAS industry in the U.S. will be $89 billion a year," he said. "We have a lot of UAS going on in Colorado than even the UAS people realize.

"We think the state deserves a piece of that market."

Vanderwerf said CU-Boulder is taking the lead as the public applicant for the Colorado test site, noting that CU has an aerospace research history going back 80 years.

VanderWerf said he believes the state's application is very strong, offering the FAA 14 different testing ranges across the state for a variety of research terrains.

"By the time you add all the 14 ranges, it's about half of the state," he said. "We have a huge diversity of terrain and research opportunities."

Vanderwerf said he expected an FAA decision no sooner than the spring of 2014.

Ben Slocumb, VP of business development at Loveland-based Numerica Corp., said he attended the half-day workshop to learn more about UAS and meet some resource contacts.

"I'm here because one of the topics is unmanned aviation systems, and we have some opportunities in that," he said. "It would benefit the type of technology we're pursuing."

UAS's can be used in a wide variety of applications, including tornado research, search and rescue operations, wildfire monitoring, livestock tracking and geological surveying.

VanderWerf said the time is ripe for the state's UAS industry to do all it can to pull together and reap the benefits of a rapidly expanding UAS market.

"Why is this UAS environment exploding? It's because electronics are getting so small and so fast and so inexpensive," he said.

"That is an explosion in innovation, and we're on the threshold of that."