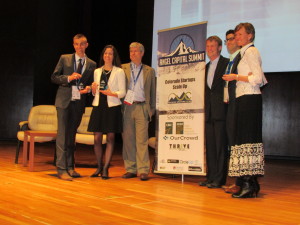 DENVER - A startup company that aims to make it easy to cook and enjoy wild and farmed fish was the investor favorite at the 2015 Rockies Venture Club Angel Capital Summit, a two-day event that concluded Tuesday.

LoveWild Fish, a Boulder-based company that offers consumers wild and farmed fish kits they can prepare "from freezer to plate in less than 20 minutes," received the most "Venture Bucks" from investors of 26 companies that pitched their business models on March 16-17.

The annual summit, hosted by the Rockies Venture Club and Denver University, aims to put pre-selected Colorado companies together with potential angel investors.

An "investors-only" forum is taking place today at Denver University where accredited investors who have a net worth of at least $1 million will meet and discuss possible investment deals with companies that pitched.

Taking second place in the Venture Bucks investment portion of the Summit was PharmaJet, a Golden-based maker of needle-free injection technology.

Ebbu, a Denver-based startup that features cutting-edge chemistry that can customize the high marijuana smokers can expect, placed third in the Venture Bucks voting.

Peter Adams, RVC director, said the companies chosen to pitch at the Summit were selected by 40-50 reviewers who ranked them on more than a dozen criteria, and every company selected to pitch was given a pitch coach and attended a pitch academy to sharpen their message.

This year marks the 30th anniversary of RVC, which is the premiere angel investing organization in the region.

Keynote speakers this year included Elaine Feeney, president and CEO of Wayin; and John Paller, founder and CEO of Lakeshore.

During the early exits panel, Mike Freeman, CEO of the Fort Collins-based Innosphere incubator, announced the launch of the Actuator, a new program that aims to help selected companies achieve an early exit through intensive mentoring and resource assistance.

The program is a partnership between the Innosphere and Covalency, a Denver-based partnership of C-level executives who have built successful tech companies.

"The whole goal for the program is to achieve an early exit -- two to three years typically," said Freeman. "We're charting really new ground and we're very excited about that."

Steve Adams, CEO of Covalency and Leo Technologies, said the Actuator will be different from traditional incubators and accelerators.

"Where we are different is we take it right through to the end with the (business) exit," he said. "Many companies just have never visualized their exit, but it's important from Day One."

Three companies with validated technologies - Vairex, Leo Technologies and Yonomi - have been chosen to be the first three Actuator participants.