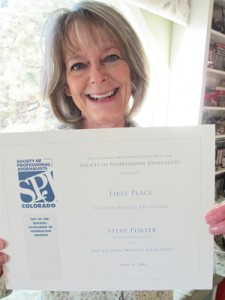 The story and blogs were written by Steve Porter, InnovatioNews editor.

"We are thrilled to accept these five awards from the Colorado Chapter of the Society of Professional Journalists," Porter said.

"It validates our journalistic credentials and the impact we're having as we go about reporting on all kinds of innovation happening all across Colorado."

Dennis Huspeni, president of SPJ's Colorado Chapter, said the 2014 Top of the Rockies regional competition had a record number of entries.

InnovatioNews was founded in June 2012 by Northern Colorado advertising and news veterans Lee and Steve Porter and Jay Jacoby.

InnovatioNews is the only media publication covering all types of innovation across the entire state of Colorado.