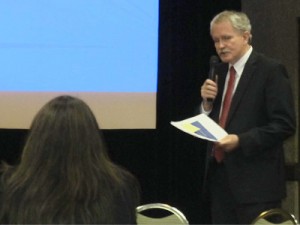 FORT COLLINS - Larimer County and particularly Fort Collins have enjoyed the image of a region with a blossoming high-tech sector, but that image has faded since its heyday in the 1990s, according to Dr. Martin Shields, Colorado State University regional economist.

Shields, speaking to an audience at "The Future of Jobs" on Wednesday, said the heyday of the 90s was dealt a blow when the dot.com bubble burst. Throw in the Great Recession of 2007-2009 and Northern Colorado's advanced technology landscape has dialed back, said Shields.

"We still have a very important high-tech sector providing good jobs, but it's not the engine it used to be," he said. "It's not the catalyst of technology we see in other places."

Shields noted that high-tech jobs make up a greater share of the region's economy when compared to the nation, but the region's technology sector has lost a lot of jobs - more than 500 -- over the last 10 years.

Shields said health care, consumer services and light manufacturing - such as the smartphone and device protectors made by OtterBox - are now the top three job drivers for the region.

He said the biggest decline over the last decade has been in computer and electronic products manufacturing.

"Boulder and Denver and Larimer County are driving some interest (in venture funding), but most of the activity is on the coasts," he said. "It makes it very difficult for an advanced technology company to think this is the place to be where the money is."

Shields said even though some advanced technology jobs have been lost and venture funding remains concentrated on the coasts, Northern Colorado still has reason to believe it can attract high-tech-related entrepreneurs and established companies.

"I'm not saying we have false illusions of what we want to be, but maybe we need a reality check."

Shields said he's seeing a shift away from computers and toward the physical and life sciences in the region.

"The growth for the region is going to be from a different sector as part of the maturation of the economy, more toward biological and physical sciences," he said.

"There's still lots of room for innovation and creativity, but those things are changing. It's a dynamic sector."

Shields was one of several speakers at The Future of Jobs event, held at the Hilton Fort Collins and hosted by the Fort Collins Area Chamber of Commerce.

Josh Birks, the city's economic health director, said the city has been working with several existing advanced industry companies since 2004, including HP's Data Center, Avago, Forney Industries and Woodward - with expansions of those four alone expected to bring in more than 1,600 new jobs.

Woodward is expected to add 1,400 new jobs by 2018 after it opens its new headquarters just east of  downtown Fort Collins.

Never in the bag

Rocky Scott, Woodward's director of corporate affairs, said the long-time Fort Collins company chose to relocate its headquarters across town rather than out-of-state because of the city's strengths, including a supportive city government, a skilled workforce and high quality of life.

But Scott said choosing Fort Collins was never in the bag.

"Some people thought it was a done deal to select Fort Collins," he said. "It never was."

RMI also recently established an office on the campus of the National Renewable Energy Laboratory in Golden that will focus on the cleantech industry, she said.

JD Foster, U.S. Chamber of Commerce deputy economist, said the nation's economy is on the mend after the Great Recession but still faces several challenges to get back to pre-recession levels.

David May, president and CEO of the Fort Collins chamber, said The Future of Jobs event was aimed at providing an assessment of where the region stands on its job base and to remind business and community leaders that the region must keep its competitive edge as local, state and national economies shift and change.

"The Fort Collins region has been very fortunate," he said. "But it's imperative we stay focused on job creation."