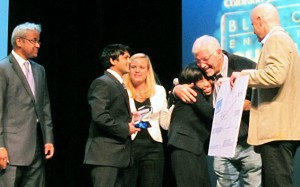 In addition to the $20,000 in prize money, Fargreen also won a year of EMyth and Blue Ocean Enterprises mentoring and $2,500 in Hewlett Packard equipment.

As winner of the collegiate portion of the competition, Fargreen's founders - Trang Tran and Tanmay Telang -- also earned the opportunity to compete in the $250,000 Enterprise Track portion of the inaugural business pitch event on May 24 during Fort Collins Startup Week.

At that time, Tran and Telang will pitch against 16 non-student business teams representing companies across Colorado and the nation.

Fargreen won $5,000 in April during the Walmart Better Living Business Plan Challenge after winning Walmart's southwest regional round in California on Feb. 14.

Fargreen also won the $12,500 grand prize in March at the University of Washington Global Enterprise Competition in Seattle.

Finishing in second place and winning $10,000 at the Collegiate Track event on May 2 was Living Ink, a CSU student team that aims to create environmentally friendly, algae-infused greeting cards that reveal messages when placed in sunlight.

Third-place winner MemPrint Dynamics, from the University of Colorado-Boulder, received $5,000 for its business plan to create thin-film, ultrafiltration membranes with nanoscale patterns to double their usable life.

The CSU Blue Ocean Enterprises Challenge aims to identify innovative ideas and emerging business leaders at both the college and early-stage startup level.

Fort Collins-based Blue Ocean Enterprises is the main sponsor of the pitch challenge in partnership with CSU's Institute for Entrepreneurship in the College of Business.

Blue Ocean was established in 2011 by OtterBox founder and chairman Curt Richardson and his wife, Nancy, to provide business services to its affiliated companies.