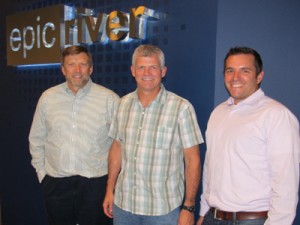 LOVELAND - The software developers at Epic River were nearly stacked on top of each other before they moved to Rocky Mountain Center for Innovation and Technology (RMCIT) last January.

Today, they're basking in a roomy, well-lit, high-tech space in Building D of the center, which occupies most of the former Agilent campus in southwest Loveland.

And there's tons of room to expand for the rapidly growing company, as it and one other company - DataTraks - remain the sole occupants of RMCIT so far.

"It's removed one of the fears of growth," said Jeff Grobaski, Epic River co-founder and senior partner "We're probably going to have to expand again within the next 12 months, and it's not scary."

Epic River has grown quickly in its nine years of existence, starting with just three staff in 2005. The custom software company now employs 25. In addition to Grobaski, the company is led by co-founder and senior partner Steve Wood and managing partner Scott Mead.

Grobaski said many factors have contributed to the company's growth and success and staying power, but one stands out. 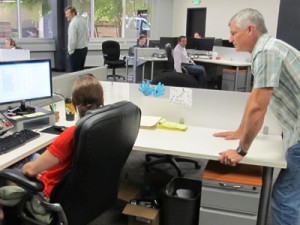 "More than anything, it's software 'productization,'" he said. "A lot of people do software for one customer, but we do it as a product because even small projects get used by a lot of people and need to be supported like a product.

"It's really the approach to the project as a potential product that helps ensure the project doesn't fail."

Grobaski offered as an example a project Epic River did for a school management system for a manager who disliked the software for his kid's school.

Working closely with the client, Epic River created a new software solution that was then sold by the client to other schools - with Epic River receiving a royalty on each sale.

"That's the way it's worked with almost all of our customers," Grobaski said.

So from where did the name Epic River come?

"In Agile software development, there's this concept of an 'epic,' which is a super set of features," he said. "We realize that a software product can only stay relevant if it has a constantly flowing river of epics."

"We have had a significant amount of word-of-mouth," he said. "As long as we keep our successful track record, I think we'll only increase the number of referrals. We do a lot of repeat business."

Grobaski said he's grateful to Kentucky-based Cumberland & Western Resources - owners of the building since December 2011 - for going slow and only taking on tenants that are suitable for an innovation and technology center.

"We know they're going to be adding some big companies in here eventually," he said. "They recognize these buildings are made for high-tech and light manufacturing, and that's fantastic."