FORT COLLINS - Every company that depends on Microsoft SQL Server has likely lost a little sleep occasionally worrying that a disaster or human foul-up could crash critical business processes. These same companies are also losing sleep over the ever-increasing licensing costs of SQL Server.

But sleep comes a little easier for those who have DH2i's Windows Application Container Software, DxConsole ®.

"Our software puts a lightweight container (which is an emerging form of virtualization) around our customers' SQL Server instances," says Don Boxley, Jr., co-founder of DH2i.

Boxley says containerized instances can be easily stacked on servers and can be moved from any server to any other server - whether the server is physical or virtual or in the cloud - in under 30 seconds.

Typical customers for DH2i are governments, hospitals, financial institutions - any entity with multiple SQL Server intances that always need to be available.

While many organizations are starting to use SQL Server in the cloud, many still rely on secure onsite servers because of high-sensitivity issues.

"Even though our solution makes it easy to build a hybrid SQL Server cloud, most of our customers have HIPAA compliance or proprietary stuff - such as police information - that they don't want stored on a public cloud," Boxley says.

The company has been an onsite client of high-tech incubator Rocky Mountain Innosphere since 2012.

Boxley said one of the biggest selling points for its software is its ability to dramatically reduce the number of SQL Server licenses and associated costs. Other attractive aspects include its ability to make every customer's SQL Server instances highly available and disaster tolerant. 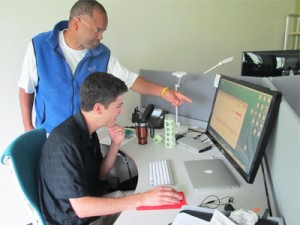 "Your SQL Server instances will experience near-zero downtime, and you'll never have to buy more SQL Server software than you need," he says.

The software sells itself, Boxley says, noting that doubtful would-be customers can try it for 30 days for free.

"Our close rate is like 95 percent after a free trial," he says.

Others are seeing the value of DH2i's technology and are endorsing it with investment. In June, the company received $125,000 from the state's Advanced Industries Accelerator Programs grant program.

Boxley said the grant will enable the company to begin hiring more employees.

"It's going to help us hire a couple of developers," he said. "We're definitely hiring."

And the startup company is debt-free. "We started with the objective of being self-funded, and we've been self-funded to date," Boxley says.

So far, DH2i is hitting on all cylinders, especially for a young startup.

Boxley acknowledges DH2i's products are aimed at providing solutions to complex data protection issues, but he says it's really simple when you break it down.