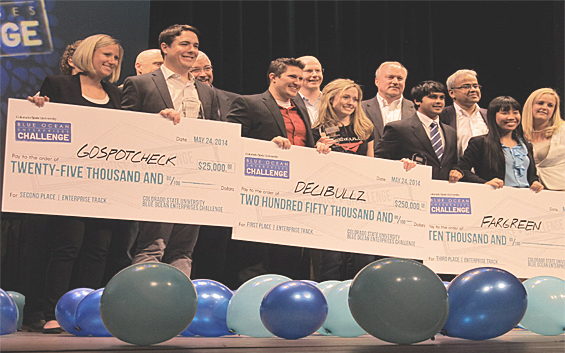 FORT COLLINS - A Loveland company that creates earphones and earpieces that are easily and quickly molded and re-moldable to exactly fit a wearer's ears took the top prize of $250,000 during the CSU Blue Ocean Enterprises Challenge Saturday evening.

Decibullz Custom Molded Earphones persuaded judges that its business model was most deserving of the first prize in the inaugural Northern Colorado pitch competition.

The company was founded by Kyle Kirkpatrick, a multi-sport athlete who became frustrated by a lack of music headphones that would stay put during exercising.

Kirkpatrick told judges he decided to create and manufacture his own design. He said the prize money would be used to scale up production of his earphones.

The third-place prize of $10,000 went to Fargreen, a CSU-based business team that won the Collegiate Track of the CSU Blue Ocean Enterprises Challenge competition on May 2. 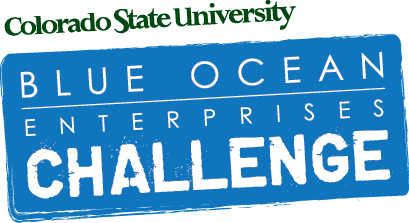 Other finalists who pitched their businesses Saturday were Fort Collins-based CommunityFunded, a unique crowdfunding company; and PayStand from Santa Cruz, Calif., which offers a payment gateway that makes it simple for organizations to receive money or sell on their websites without transaction costs.

On Friday, the first-ever Trolley Pitch Competition saw BOEC Collegiate Track contestants pitching their businesses to judges aboard Fort Collins Railway's historic Birney Car 21 trolley as it traveled up and down its Mountain Avenue route.

Winners of the trolley pitch competition announced Saturday night were:

All three winners were teams from the Colorado State University College of Business and the CSU Institute of Entrepreneurship headed by Charisse Bowen.

Bowen, who worked with Blue Ocean Enterprises to organize the competition, said she was very happy with the final result.

"I'm just so thrilled and pleased with our competitors," she said before announcing Saturday's winners.

The CSU BOEC drew a total of 32 business teams from Colorado's higher education institutions and across the nation.