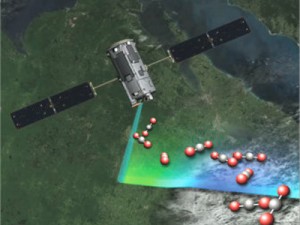 FORT COLLINS - Colorado State University scientists are involved in the launch of a $467 million NASA satellite that will provide researchers with the clearest picture to date of carbon dioxide accumulating in the atmosphere and in natural "sinks' such as plants and oceans.

Researchers in the CSU Department of Atmospheric Sciences and CIRA, the Cooperative Institute for Research in the Atmosphere, helped develop the sophisticated algorithms that will crunch data collected by NASA's Orbiting Carbon Observatory-2 satellite.

The OCO-2 satellite was scheduled to launch at 2:56 a.m. today (July 1) from Vandenberg Air Force base in California. Once in orbit, the CSU team will work with NASA to analyze the information the satellite collects.

"We at CSU have been working hard on this mission for many years now," said Professor Chris O'Dell, leader of the CSU team. "We've been involved with OCO-2 from the original concept design process through the implementation of the algorithms used to actually produce the measurements."

The seven-foot-long satellite weighs 999 pounds and will circle the Earth from pole-to-pole every 98 minutes.

The satellite is expected to continue to orbit the Earth for at least two years and will collect data at a higher resolution and with greater accuracy than any previous satellite.

CSU said the satellite will provide information about CO2 sources and sinks, which is expected to help scientists worldwide to develop better climate models.

"This information plays a huge role in our ability to predict how our climate is changing," O'Dell said.