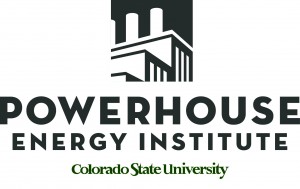 FORT COLLINS - Colorado State University today broke ground on an $18.5 million, 65,000-square-foot expansion of its Engines and Energy Conversion Laboratory that will morph into the Powerhouse Energy Institute when it is completed in late 2013 or early 2014.

CSU, city and local business representatives joined in a ceremony on the grounds of the historic former city power plant building Monday to celebrate 20 years of new use of the historic structure as the EECL and mark its future as a focal point for CSU and private sector energy research programs.

"With this dramatic expansion we're morphing into a university-based institute that will be a more coherent framework for energy in the community," said Dr. Bryan Willson, founder and co-director of the EECL.

Willson said the four-story expansion will enlarge the facility just north of downtown Fort Collins to about 100,000 total square-feet.

For the past two decades, the EECL has focused on state-of-the-art research on large industrial engines and worked closely with such companies as Woodward, Cummins, John Deere and Caterpillar.

The lab has also spun off startup companies such as EnviroFit, which makes environmentally friendly, affordable stoves for residents of developing nations.

In its future incarnation, the EECL will broaden the scope of its activities to include energy faculty across all eight of CSU's colleges and provide more space for private companies to carry out research with student partners.

Willson said two and one-half floors of the new building to be added to the existing historic structure will be occupied by CSU faculty and programs, while the upper one and a half floors will be leased to private companies.

The completed structure - including retrofitting of the historic portion -- will include the latest in energy technology and be a LEED Platinum-rated building.

That will include advanced LED lighting designed by EECL, advanced daylighting controls, combined heat and power instead of a boiler for heating, use of wind, solar and biomass (with algae grown on the roof) and extensive energy storage - including nighttime cold storage instead of a chiller for cooling.

"It's probably the first building in 50 years to be built without a chiller," Willson said.

Neenan Archistruction in Fort Collins will be general contractor for the project, whose design Willson described as "very challenging," given its constrained location next to a railroad tracks on the south and river corridor on the north.

Site work will also take into consideration its historic conservation values, the fact that the building was built on a former city landfill and its location next to an environmental Superfund site.

But all of those hurdles were eventually overcome during the last two years of planning, and Willson said the end result will be worth it.

"We will wind up with a building that is something people will get on an airplane to come and see," he said. "We're going to make it available to faculty from around the world."

The Powerhouse Energy Institute will be financed with a combination of private and public funds. So far, private donors have led the way, with the Bohemian Foundation contributing the biggest donation at $5 million.

"The Bohemian Foundation is contributing to this expansion in recognition of the extraordinary efforts the EECL has led globally to improve the human condition and their commitment to grow these programs in the future," said Joe Zimlich, Bohemian Companies CEO.

"We're proud to help researchers and students at Colorado State University have a positive impact around the world."

Woodward - which has long conducted research at the EECL -- has pledged $2.5 million to the project.

"Woodward supports the EECL because it complements our mission as a clean energy leader," said Tom Gendron, Woodward's chairman and CEO. "The students we have hired from the EECL are prepared to succeed because of the lab's culture of innovation, and have experience solving real-world, global engineering challenges."

Public fundraising is now under way, Willson said, and anyone interested in making a donation can visit www.energyinstitute.colostate.edu for more information.

Also moving into the new addition upon its completion will be the CSU Center for the New Energy Economy and the university's Department of Mechanical Engineering's Industrial Assessment Center.

The EECL will also be partnering with the Rocky Mountain Innosphere, an incubator for startup tech companies.

RMI will manage incubator space in the new addition, with special emphasis on startups coming out of CSU laboratories.

"RMI will complement the EECL and its new Powerhouse Energy Institute by providing entrepreneurs and researchers with an array of targeted resources and services," said Mike Freeman, RMI's CEO.

"It is an incredible opportunity for the university," he said. "We have been able to bootstrap our way into being recognized as a leading energy program, and this allows us to move into the top leadership not only in the U.S. but also on the international stage.

"This really puts us on the map."