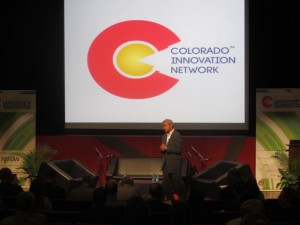 DENVER - The head of one of the world's biggest corporations on Wednesday said innovation and growth are inextricably entwined, bringing prosperity to those who embrace both.

"We can't talk about innovation without growth," said Muhtar Kent, chairman and CEO of The Coca-Cola Company, which has 770,000 employees and more than 1,000 production facilities around the globe.

"The two are symbiotic, and they should be," said Kent, who was the keynote speaker for the first day of the Colorado Innovation Network 2012 Inaugural Summit at the Denver Art Museum.

The theme of the two-day event, which concludes today, is "Leadership and Collaboration in Transformative Times."

"Growth is the way we will overcome the challenges we face in the world today, and innovation is one of the central requirements for that sustainability of growth," Kent told an invitation-only audience of about 200.

Hickenlooper, who opened the summit, said the aim of COIN is to "inculcate a culture of innovation and technology."

"We are dedicated to turning Colorado into the most innovative state in the country," he said. "I think ideas are part of Colorado's DNA, and having a new patent office (in Denver in 2014) is a demonstration that we're generating a lot of ideas."

Hickenlooper noted that 5,000 patents were issued in Colorado in 2011 alone.

"What Colorado is trying to do is create a vibrant innovation ecosystem, a fertile ground for entrepreneurs," he said.

Denver Mayor Michael Hancock reinforced that point, saying COIN was "grasping the entrepreneurial spirit that is pervading the state of Colorado."

Hancock, who succeeded Hickenlooper as Denver's mayor, said the city aims to become "the innovation capital of the country."

"Young people age 18 to 40 are flocking to Denver like no other place," he said. "The reason they're coming is they're bringing that entrepreneurial innovative spirit that's bubbling out of their ears."

"And by being innovative, we're coming out of this recession poised to compete," Hancock said. "Denver is growing more entrepreneurial exponentially by the day."

Betsey Hale, the city of Loveland's economic development director, said the summit's first day was a reinforcement of her own views on the need to nurture and invest in innovation.

"You cannot save yourself to prosperity," Hale said, echoing Coca-Cola CEO Kent's remarks. "You can't quit spending when times are tough. You have to keep investing in innovation."

Results of the first Colorado Innovation Index were also discussed Wednesday by Stephan Weiler, CSU professor of economics. The report noted the state is well positioned to be an innovation leader, with a high level of private capital available from venture capitalists, small business loans and access to bank funding.

The report also noted the state is second only to Massachusetts in the number of workers with a bachelor's degree or higher.

"Colorado now has standards with which to study innovation performance to assess the impact of our innovation-focused initiatives, policies and investments on our economy," said Kelly Quann, COIN executive director.

The report is available for viewing at http://coloradoinnovationnetwork.com/colorado-innovation-index-2/