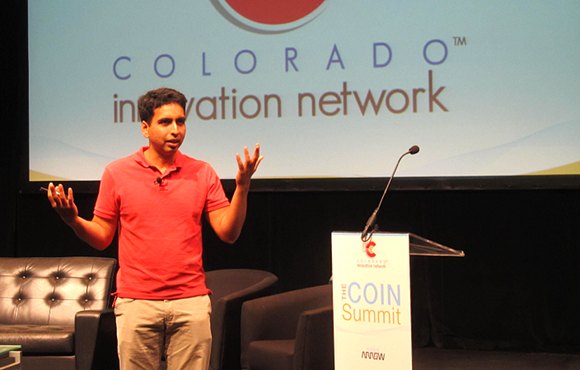 DENVER -- Sal Khan was a hedge fund analyst when he heard his cousin was having trouble with math.

That was in 2004, and Khan's self-made videos to help his cousin improve her math skills has since transformed into The Khan Academy, an online teaching site that -- with an endorsement from Bill Gates and a $4 million investment from Gates and Google in 2010 -- has resulted in the site now getting six million unique visitors each month.

Khan, who quit his lucrative job to head up the Academy, said his idea has lit up education around the world. More than 100 million people in 216 countries have used the free site so far, Khan said Wednesday during the first day of the two-day Colorado Innovation Network (COIN) Summit at the Denver Center for the Performing Arts.

Khan was the kickoff speaker for the second COIN Summit presented by Gov. John Hickenlooper's office though the Office of Economic Development and International Trade and sponsorship that includes Arrow Electronics, General Electric, Colorado State University, OtterBox and PriceWaterhouseCoopers.

Khan said his Academy focuses on helping students learn math, science, history and other subjects through a collection of videos and individualized testing that allows a student to proceed at his or her own pace until the subject matter is mastered.

That's unlike most public school classes, he noted, which simply award grades and let students move along without fully learning the educational material.

"Education moves on even when a student doesn't learn all the concepts," he said. "The Academy doesn't constrain how long it takes to learn.

"I believe we're living in a special time of history where we can reach more people than ever thought possible," said Khan, whose slogan is "A free, world-class education for anyone, anywhere."

Innovative online, interactive education is viewed by some in the educational establishment as threatening the status quo. But that''s something that may be overdue, said members of a panel on the future of higher education.

Greg Maffei, president and CEO of Liberty Media, said the U.S. suffers from a shortage of high-tech talent, high youth unemployment and college graduates loaded with debt upon receiving their degree.

Maffei said most universities are "closed circuits" that are in desperate need of change.

"I think there's going to be a massive transformation of these university systems," he said.

Jim Deters, founder and CEO of Denver-based incubator Galvanize, said there needs to be a "great unbundling of learning" so self-directed entrepreneurs can get the educational skills they want and need.

"I truly believe we need to unlock this knowledge and make it available to everyone," he said.

Innovation in education was just one of several innovation-related topics discussed Wednesday during the COIN Summit -- this year called "Transcending Boundaries in the Global Innovation Economy -- aimed at continuing the mission of building a global innovation network in Colorado.

"We challenge the COIN Summit delegates to focus on transcending boundaries this year," said Hickenlooper. "Whether it is a cross-border collaboration or unexpected partnerships between industry and sector leaders, transcending these boundaries strengthens Colorado's innovation economy."

Kim Jordan, co-founder and CEO of Fort Collins-based New Belgium Brewing, said her company has embraced innovation at every step of its development since its founding in 1997.

Jordan, who announced she had just hired the company's 500th employee, said New Belgium was the first American company to specialize in Belgian-style beers, now an industry staple.

Jordan also noted that New Belgium has always focused on energy efficiency and environmental ethics along with employee ownership -- all innovative efforts by the company to set a new course for brewery operations.

And that helps New Belgium establish its own unique identity, she noted.

"I believe that everything we do is brand," she said. "It's the total essence of who we are."

Thursday's lineup at the invitation-only summit includes a keynote address by Hikmet Ersek, president and CEO of Western Union; a presentation by Denver Mayor Michael Hancock on Denver's Ideas Economy; results of the Glorious Failure Innovation Challenge; and the official unveiling of the Colorado Brand Identity.

COIN Summit 2013 The Future is Bright