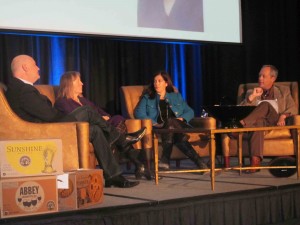 LOVELAND - Colorado needs to do a better job of investing in its existing manufacturing sector and in creating an educational system that turns out students who have the skills to take on the high-tech manufacturing jobs of today.

Those were two of the messages that came from a discussion of the state of manufacturing in Colorado during the 2013 Colorado Advanced Manufacturing Alliance conference held today at the Embassy Suites in Loveland.

During a lunch roundtable discussion moderated by CAMA President Tim Heaton, panelists said more needs to be done to encourage existing manufacturers to invest and remain in the state.

"I think we do a decent job of bringing new manufacturers into Colorado, but not in the companies who are here," said Christine Perich, COO at New Belgium Brewing in Fort Collins.

That view was echoed by Andrew Cousin, CEO of Circle Graphics in Longmont.

"It's not just about attracting new businesses but also about investing in existing operations," he said. "It makes a big difference on which state you want to make big investments."

Michele Bremer, HR director at Cool Planet Energy Systems in Greenwood Village, said she would like to see Colorado's community colleges and higher education institutions do a better job in training students for high-tech manufacturing positions.

"I'd like to see educational policies that focus on reality - that this is that it takes to get a job," she said. "Can you do the actual tasks that need to get done?"

All three panelists said their manufacturing success was due to innovation and lean, sustainable practices.

Cousin said Circle Graphics - which has captured 65 percent of its market in its 12-year history - said his company came up with disruptive ways to improve an old industry.

"Our founders found the industry was sleepy and not utilizing the new technology that was becoming available," he said, noting that Circle Graphics now has the largest digital printer in the business.

"It's about innovation and controlling costs," he said, "and being the only company that could produce a poster big enough to put on a billboard."

Cousin said manufacturers should not "be daunted by the fact that something has always been done a certain way."

Perich said New Belgium's success - the company is the third-largest craft brewer in the U.S. - has come by scaling up slowly.

"We have something called the 'chunk theory,' which means we add things by chunks and only things we can afford in a certain period of time.

"We've had to be mindful of dividing and conquering and not getting ahead of our ability to afford it."

Perich said deciding to open a second brewery in Asheville, N.C. in December has been "hands-down the biggest thing we've ever done."

Bremer said conservative scaling of her business has also been a key to success.

"We look at who else has tried and failed and figured out what went wrong," she said. "Very often, it's a scale issue, and you only get one chance to do it right."

All three panelists stressed the importance of innovation when it comes to a successful manufacturing.

"It's very important to us," Perich said. "Craft brewing itself is an innovation. We're constantly making new beers, and we're also constantly looking at innovating our processes.

"These days you have to be innovative across the board."