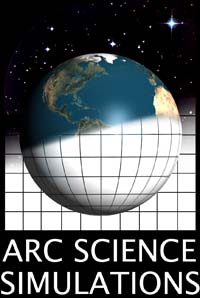 LOVELAND -- To say that the OmniGlobe has taken the world by storm is not that far-fetched.

A view of storms and weather patterns are, in fact, features possible with OmniGlobe and ARC Science Simulations -- producer of the OmniGlobe -- offers a world of possibilities with its spherical displays. [See OmniGlobe video below]

It's not just a painted globe but a moving, changing view that provides a much larger perspective. In addition to the natural Earth and solar system, subjects can be anything of global scope including geophysical, ecology, demographics, geopolitics and historical perspectives.

It can also feature climate change, plate tectonics, human impact, the planets, the Sun, the planets and major moons. As an example, the Paleo-Animation possibility shows the movement and change of the Earth's land masses from the paleolithic era to modern day.

The content, though, doesn't need to be a world representation, but can feature graphics of any type that might work on a ball.

For business use, as an example, the globe can be used for concepts such as shipping routes, air traffic, corporate locations, sales outlets and markets.

The OmniGlobe, which is available in 32, 48 and 60-inch sizes, offers interactive presentations with its visual properties. ARC's patents include reflective dispersion optics, the coupling of two high-definition (HD) projectors and enhanced contrast screen technology creating a greater image contrast. 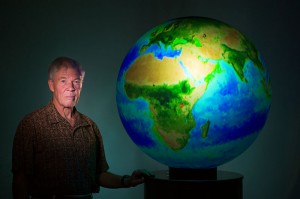 The two HD projectors put almost three million pixels on the 48 and 60-inch globes. The 32-inch globe uses a single projector but can also achieve similar surface brightness and pixel density on a smaller surface.

ARC's Geometer software converts conventional 2-D animations into a spherical geometry that can be used for globe movies or interactive animations.

"While there is also a corporate use, our market is predominately museum and science centers," says Thomas Ligon, president, founder and developer of ARC Science Simulations. "Our software can take any concept that can be put on a screen and put it on a globe."

The educational possibilities are endless. according to users.

"We have a 32-inch globe and we've used it in several different ways," says Chris Romero, lead faculty member at Front Range Community College in Fort Collins. "We initially bought the globe as a showcase for the lobby of our new building, but there were more uses.

"Instructionally, it's being used for astronomy, biology, meteorology and geology. For instance, it can show continental drift, weather patterns, different planets and their moons, or geological activity such as volcanic activity around the world."

Romero uses the paleolithic animation for his classes. "I show students how land masses have changed significantly over the last 600 million years and how that contributed to life on land and in the ocean," he said.

"The visual helps their understanding much more so than looking at static pictures I would project on a screen in my classroom. It's a much better representation."

The Center for Multi-scale Modeling of Atmospheric Processes (CMMAP) at Colorado State University also has one of the 32-inch globes.

"CMMAP purchased it with funding from the National Science Foundation," says Kelley Wittmeyer, a research associate at the center. "We initially bought it so we could model clouds, sea ice and the ocean on a global scale. We have outreach programs in science and education and we also have grad student colloquiums and teacher education programs where we've used it. It's on a rolling pedestal so it can be taken into classrooms."

Andy Kaufman, science teacher at Conrad Ball Middle School in Loveland, says it's been an invaluable tool. "It's been to 21 of our 30 schools in the district and is being used in different ways in different classrooms," he said. "Sometimes, it's integrated with a particular lesson plan. Other times, it's used as a showcase item to get kids excited about science. Teachers are also integrating iPad use with the OmniGlobe."

One such lesson uses the globe to show a map with longitude and latitude lines and then the students estimate the locations and use the iPad to zoom in and learn about the location and even create a passport for that location.

Teachers have also used it to track travel patterns and students have used it to help with their report presentations.

"There's no end to how it can be used," Kaufman says. "As teachers use it, they're finding more ways to integrate it into their curriculum. The kids get extremely excited about using it.

"I have an example of a struggling student who had trouble with short-term memory and couldn't recall things. We did a lesson about the seasons using the globe with this young man and, at the end of the year, he could recall the information. I was surprised and excited. It has an impact on learning in a way that helps students retain and better understand things than they would using a map or an atlas."

With each use, interest continues to grow. The company has five employees including Ligon and recently expanded its shop space from 4,000 to 6,800 square feet.

It all began with a simple suggestion. With a master's degree in physics and after 15 years working at Hewlett Packard, Ligon struck out on his own. His first product was "Dance of the Planets" back in the 1990s. "It was a DOS program and was very successful," Ligon recalls.

"I wanted to go to a different product with a greater market potential. I had an inquiry from an international organization that had 20 company board rooms and wanted digital globes on the tables. It was the last I heard from this guy, but I was intrigued by the idea so I began to do low-cost experiments over a few years and it worked."

Indeed, it did work.

ARC has so far placed the OmniGlobe in 91 locations in 27 countries. The interest keeps growing, and another 11 installations are pending.

For more information, visit the company's website at http://www.arcscience.com.