FORT COLLINS -Eight years ago, Dave Kramer was a successful serial entrepreneur in California when he decided to fulfill a dream of retiring to Colorado to snowboard the Rockies.

But he didn't count on the Great Recession of 2008-2009 and lost much of his investments. It meant starting over, but Kramer - a lifelong computer whiz kid since age 8 when he started writing software programs - took the setback in stride and began developing his new business, AllProWebTools.

That was in 2009, and Kramer spent the next three years in his basement laying out the foundation for AllProWebTools, a business management software company that specializes in building the tools small businesses need to simplify their website operations and track their sales performance.

"My passion is small business and entrepreneurs," says Kramer, whose company now employs a dozen people and serves about 150 clients. "I want to help the local economy and the little guys because these are the people helping the economy with their good ideas."

AllProWebTools  builds its websites and software systems from the ground up, offering simplified solutions for non-technical business owners. 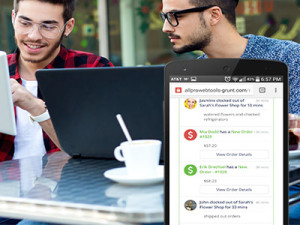 "Today, many small businesses are expected to use about 20 systems, from Go Daddy to Mail Chimp to Quickbooks, etc.," Kramer says. "The ability to bring all of this into one location and tell you how your business is performing is key to your success."

Kramer notes that AllProWebTools offers data that can't be obtained from other systems, such as how much money was raised from a particular email campaign.

"They were able to grow their revenues by knowing what was working and not working in their business," Kramer says. "It's all due to the simplicity of having everything in one location."

Frailey said AllProWebTools's tech support is amazing, once rebuilding a crashed website into the AllProWebTools platform in less than 24 hours.

"When I have a problem, I call or email and it's fixed immediately," he said. "I'm very impressed."

And they find it with AllProWebTools.

"We understand people have a fear of learning new products," he says. "We're hands-on. People call us and we offer 15 hours of support to learn the system in the first 30 days."

After that, customers get 30 minutes of free tech support every month.

But Kramer said he doesn't want AllProWebTools to be thought of simply as a website builder competing with systems like WordPress.

That includes a variety of one-location business services such as management of shipping, passwords, email marketing and inventory control - all of which help small business owners save time and money, Kramer notes.

And while he didn't intend to move from California to Colorado to start another business, Kramer says the relocation has been more than satisfying.

"I really do like the atmosphere in Colorado," he says. "I didn't know there was such an entrepreneurial atmosphere here, but I've been pleasantly surprised."