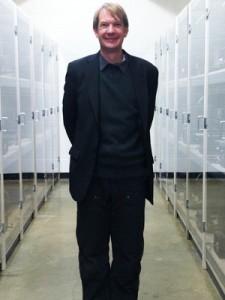 It's understandable that moving a growing company to a newly purchased 17,000-square-foot building on nine acres would leave most CEOs feeling a bit giddy. More noteworthy, perhaps, is that Aleph Objects is just three years old -- started in Moe's basement -- and was in 2,700 square feet of commercial space before moving to their new location in October.

The bigger picture, though, is what an open hardware approach for Aleph Objects does for the company, its user base, the 3D printer industry, the technology market, and the world at large. Most promising -- in a competitive, globalized economy -- is Moe's commitment to keeping and growing his burgeoning manufacturing business where he lives and the organization started -- in Loveland.

As the company settles into its new space -- the former Eldon James facility on the north side of Loveland -- Moe's biggest problem has been solved. "We went from a place where we simply could not keep up with demand to a situation where we can build far more printers than we could ever sell," he says.

The centerpiece of the new facility is the printer assembly room, where a main assembly line has the capacity to create a printer every 40 minutes, or 15 in a typical work day. A secondary line is also in place, poised to double production, as needed. And there is space to add a third line, taking the 25-person company from 15 printers a day and shipping 56 printers a week to being able to sell, build and ship tens of thousands a year. The company also has more space to stock and fulfill orders of the wide variety of 3D printing filaments and printer parts and components it sells to users. 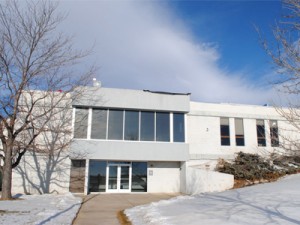 The building also features an office where design/engineering, accounting, and HR staff work; research and development space; component and pilot assembly areas; a room where printers and documentation are packed for customers; and a shipping and receiving area; along with a room where 120 Aleph Objects 3D printers are at work printing key parts to build new machines.

Moe notes that, at capacity, 135 machines -- some with two print heads -- will work under the supervision of just two operators. "It is, as far as we know, the largest 3D printer cluster in the world," he says, "and we estimate we've printed 200,000 parts."

What do users do with them?

He notes that a customer using a LulzBot 3D printer for prototyping an electrical interconnect housing landed a $50,000 contract based on a printed sample that cost a few dollars to create. To begin production, the company bought dozens more printers to give it the capacity it needed -- at a fraction of the cost of creating injection molds. 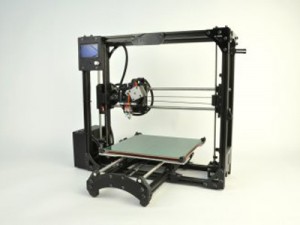 Another makes custom-fit mouth guards where the end-user chooses the size, color and even a logo that is part of the product. It used to take them a week to create a prototype that cost them between $250 and $400 to make. Now, they design and print off a sample in just hours for $15 to $20 each.

It's no surprise that Aleph Objects' 3D printers have attracted a lot of attention. Its latest model, introduced to the public on Jan. 8, is no exception. Like its predecessors, The LulzBot TAZ 3 breaks new ground in terms of capabilities and performance in the emerging field.

Moe notes that the TAZ 3 boasts a number of differentiating features, including:

*The largest print area/build volume available in a desktop 3D printr under $2,500

*One of the fastest print rates on the market, along with high print resolution 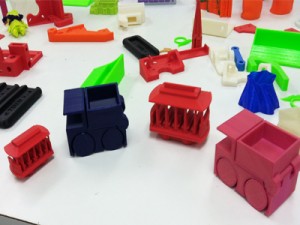 The unit's versatility comes from the "hot end" Aleph Objects created, the heated nozzle that melts and, with the extruder and mount plate, puts the printing material in place at a variety of resolutions. It handles materials including nylon, ABS, corn-based PLA, PVA, high-impact polystyrene, composite "wood" (sawdust in a plastic substrate), PETT, polycarbonate -- and some that even glow in the dark.

The printer also provides an infinite variety of infill options, giving the user control of the type of pattern used to create the internal structure of what is being printed, based on conserving material or meeting weight and strength requirements. Two or more materials can be used in succession to print out different sections or layers of an object. It can print without being connected to a computer (known as "tetherless" operation) using an SD card. A second hot end or toolhead can be added to the unit to create a dual-extruder unit.

The company works regularly to push the limits of the technology. Recently it tried running solder through one of its machines, but that is not a recommended application at this point.

Buy or build your own

Anyone with $2,195 can go to the company's website, place an order, and have one of their very own delivered to them, along with any of some 250 products, including motors, belts, circuit board and much more. With new customer fulfillment centers in Chicago, Toronto, and the UK, direct shipment to users is fast and efficient.

What many find surprising, though, is that Aleph Objects -- as an organization committed to taking an open hardware approach to how it does business -- makes all the information required to build a TAZ 3 available to anyone, anywhere.

Anyone with an Internet connection and the technical skill can go to www.lulzbot.com and access two gigabytes of data on how to build their own TAZ 3. The company's development directory, maintained by the CTO, is updated and synched to files the public has access to once an hour during the work day.

"You can literally track what we are working on, day to day, hour by hour," Moe notes. Taking the DIY route requires about $800 in parts, and several hours of assembly.

Moe acknowledges that to certain people, this approach might seem odd, even a bit crazy. He admits that the worst-case scenario for many companies has already happened, more than once, to his firm - someone has taken the work done by Moe's team and set up clones of Aleph Objects in the U.S., Argentina, Spain, China and Taiwan.

"Yes, we will lose some sales when someone builds their own printer, and yes, you could clone the organization," he said. "CSU has some systems that they cloned using our plans. That's actually a point of pride for us. It shows that we have created a robust product with leading-edge components and the best capabilities available."

The benefits of the open approach, though, far outweigh the risks, he insists.

"We've been able to build a massive, collaborative community to develop this hardware must faster than we ever could on our own. Lots of eyeballs, ideas and input means things iterate a lot faster, thanks to the coordination of people around the world.

"It's all about creating and serving a user base where user rights are respected. When you update, for example, your iPhone, you lose more rights each time, and give up more information about yourself. Apple and app developers then sell that to more and more partners, who use that to market to you. Everything at our company is done from the perspective of the end-users and their benefit. When we feed that ecosystem -- and give all users that freedom -- they happily contribute back. They know an open system does not take advantage of them."

There are some organizations that have started to take an open approach and -- when a notable innovation has developed -- the company then protects that and makes it proprietary. "Those are the worst of the worst," Moe notes. "Our approach is to create the best product and provide the best experience right out of the box. That is how we compete."

When asked how long it may have taken him to get to this point using a non-open approach -- and it if could have been done at all -- Moe's response is worthy of his philosophy degree: "It's a good question, and hard to answer. It is a bit like asking 'What if Napoleon never went to Russia?' We started with the foundation laid by RepRap, but that was built on free software. Could that hardware have existed without a free Apache webserver? It's tough to say, but it's likely that without an open approach, or heading in an open direction, we may not have built one at all."

"It is important to understand that we are not a 3D printer company," Moe says. "We are an open hardware company, and 3D printers happened to be our first product. When I started an Internet company in 1995, I had no idea how it would be used. I just knew it was something they would want and need. The same goes for 3D printers, and whatever we make next.

"3D printers are the first 'killer app' for open hardware. We don't know what the people buying our products might dream up. We just want to give them tools to bring what they imagine to life."

The larger, long-term battle for Moe and other proponents of open development communities is reforming the U.S. patent system. "It's antiquated, a legacy 19th century system. Everyone, from the smallest to the largest organizations, dislikes the system. We're currently trapped in it, and it does not work to anyone's benefit. It needs to be rectified. We see Aleph Objects as a model for others to emulate."

Meanwhile, the company remains in growth mode, hiring new key staff members, growing its participation in trade shows, sending out more machines for industry experts to review, and bringing all manufacturing and assembly in house. Its initial production line is now on line, and as sales ramp up, the second one will be built out.