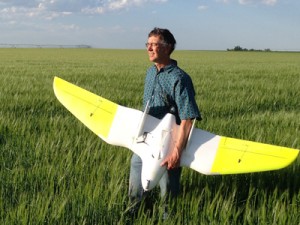 BOULDER--Technology in the agricultural field has literally taken flight.

With mounted cameras, drones provided by Agribotix provide an aerial overview of crops and can help agricultural clients make good decisions regarding land use and crop needs.

Agribotix is a drone-based, remote-sensing company that provides imaging and analysis to agricultural clients with the ultimate goal of helping those clients significantly reduce inputs for the farm. The Agribotix team consists of experts in aviation, communications, image processing, and electromechanics.

Tom McKinnon, Chief Technical Officer and Agribotix founder, says, "We want to give farmers something they can use. One example is that we had a farmer with a 250-acre field which he irrigated with a center-pivot system. One of the nozzles was clogged but, because of the size of his land, it was hard to find and it was causing harm to his crops.

"Our Hornet -- which is the drone -- gave him pictures that pinpointed the problem area."

The Hornet is a rugged, low-cost unmanned aerial vehicle (UAV) airframe, designed around a flying wing design that eliminates hassles associated with assembling a more traditional airframe in the field. Setup time from the back of the truck to flight is 10 minutes.

The Hornet has a five-foot wing span and weighs just under five pounds, including equipment. It launches using a simple bungee system rather than a complicated catapult.

"Our company is a data company as opposed to a drone company. We don't design the drone; we just furnish them and help the farmer get good data," McKinnon says.

The drone collects data through the use of either a high-resolution color or infrared camera and is capable of collecting high-resolution images. Current customers have used the produced images to identify weed and pest infestations, or attain an overall gauge of crop health and estimate yields.

The infrared camera pictures are used to generate Normalized Difference Vegetation Index (NDVI) images that can be used to identify the fertilizer requirements for different field.

After the images in an area are collected, proprietary software developed by Agribotix deploys them to cloud-based supercomputers.  From there, high-resolution, geo-referenced color and NDVI images of the farm are delivered within hours of collection. These images are hosted on Agribotix servers for easy access from multiple devices. 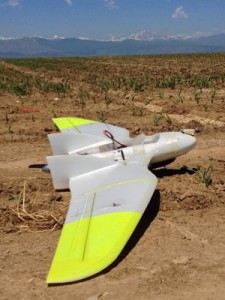 Agribotix services begin with a drone lease that provides the Hornet drone, bungee launcher, complete ground station, and two day training in the operation of drone aircraft for agricultural applications.  It also provides access to the cloud-based software services.

"By flying the drone over the field, we can see the health of the crop in fields too large to walk," McKinnon says. "Healthy plants reflect strongly in the infra-red images, so the color is an indicator of the plant health. As they get stressed, they don't reflect as well."

Training is required, he says. "We've designed this so the training is pretty minimal. It takes two days and is totally hands-on. We go out in the field and we put the box on the ground at the farmers' feet and they put the puzzle together.

"Within minutes, they're launching the plane in the air."

Other companies provide UAVs, he says, but they're usually for sale at a high price. "It can run from $13,000 up to $70,000. We wanted to remove barriers, so we adopted this leasing model that runs $1,500 a season. Then, they give it back to us and next year they get the upgraded version."

The next step after image collection is processing. "The airplane takes tons of pictures. To do a quarter square mile, we take 500 pictures so every square inch of land is there. Then, we have software that stitches them together."

The cost of the drone and the imaging is recouped through the farmer's increased efficiency.

One way that happens is helping determine cut-backs on fertilizer.

"Fertilizer used to be cheap so farmers could put on extra to be sure the crops were covered," McKinnon says. "But now fertilizer is more expensive and there's also more pressure on preventing runoff. So being closer to using the right amount has become more important," he says.

"When the drone flies over the field and gets the images, we can see which sections look under-fertilized. They save money and still produce the same amount of crop."

McKinnon, who holds a Ph.D. in chemical engineering from Massachusetts Institute of Technology (MIT), started Agribotix in the spring of 2013. He is also founder of Inventworks, Inc., a rapid prototyping and limited-run manufacturing firm.

"Being in that business, we would ask everyone we met, 'What kind of technical problems do you have and how can we solve them for you?'"

One such discussion took McKinnon to Mongolia on a project with the Denver Zoo. Another one found him with a team in New Zealand, creating digital elevation maps of glaciers. At that point, he knew there was a need for the new company.

Richard P. Reading, VP for Conservation at the Denver Zoological Foundation, says, "I see tremendous value for the use of drones in conservation work. We have been working with Agribotix on just a few ideas we've explored, and we hope to do more."

Reading describes one of the previous collaborations: "We have been trying to catch vultures (notoriously difficult to catch) using gyrocopter drones that fly over their nests and drop a net on them. Drones are quiet unfamiliar, so when we tested these devices on our birds at the zoo, they simply looked up at them and seemed to be trying to figure out what they were.

"In Mongolia, we had trouble with the very windy conditions there, but I think Tom has fixed that problem. We've also talked with Tom about programming drones to fly over vulture nest sites to see if they are still active. This remote method can help us monitor nesting success rates and then determine why some nests are more successful than others.

"Drones can be quiet and fly high, and so present much less of a disturbance for these often-shy animals."

Another option is to use drones to survey animals. "Flying is a great way to count animals, but it is also quite dangerous and may well represent the leading cause of death for wildlife biologists in the field," Reading explains. "So, a drone with cameras can be programmed to fly specific routes and collect data without the danger."

Reading says conservation groups are exploring the use of drones for anti-poaching patrols because they are much quieter than traditional aircraft. They can also fly high or even at night with infra-red cameras.

"The costs of each of these options promise to be much lower than traditional measures, and with increased efficacy. We're excited about the prospects for future gains in conservation using drone technology," Reading says.

Business is good, McKinnon says. "Getting business has been no problem at all. In fact, we've had to turn business away."

Expansion is possible, he says. "The company is self-funded and we'll be looking for investors this fall."