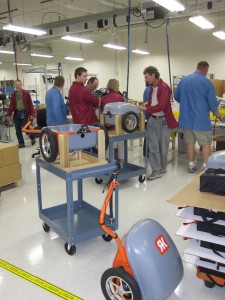 FORT COLLINS -- When Entrepreneur Magazine in June named Ridekick International one of the top 100 Brilliant Companies in the nation, it was a surprise to the Fort Collins-based company.

"We had no idea it was coming," said Dee Wanger, vice president and co-owner with her husband, Mark. "We didn't apply for the acknowledgement. They approached us."

The designation placed Ridekick as one of 10 top companies in the invention category in the magazine's annual look at what it calls the "brightest ideas, the hottest industries and the most insightful innovators."

The invention is the Ridekick motorized trailer that runs on a 500-watt electric brush motor, a 24-volt, 12-amp sealed lead acid battery and is capable of producing non-pedaling bike speeds up to 19 mph.

On a full charge -- without pedaling -- a rider can go about 12 miles. Ridekick weighs 40 pounds, including battery pack. Its cargo area can hold a computer, two or three soft-side grocery bags and up to 100 pounds. With the lead acid battery, Ridekick runs about $700. Recently, a lithium battery has been made available, taking the cost up to $1,359.

"It's a longer-range battery," said Dee. "We did it because the market demanded it. Some riders wanted more miles on a charge. The one we selected is a Lithium Iron LiFePO4. It's a 20-Ah (amp-hour) that will take the rider 25 to 30 miles on a charge and -- over the life of the battery -- will support 45,000 miles."

For the average commute -- based on a 10-mile-round-trip each work day, that would total about 2,500 miles a year.

"So clearly this battery will last your lifetime," Dee said. "Averaged over the life of the battery, it's about two cents a mile. And if you use it in place of a car, you save in gas and maintenance so you get your money back in a couple of years' time."

(Prospective buyers should realize that simply pedaling their Ridekick-assisted bicycle will not recharge Ridekick's battery. That takes a full six-hour, plug-in recharge.)

Ridekick is creating a breeze of interest worldwide. The company and its product have been written up in magazines all over the world, including Momentum Magazine in Canada; Ride On Magazine in Australia; and Gaijin Riders in Japan.

"We also had a press release that went viral and we saw ourselves written up in the L.A. Times, Wired Magazine, and even saw something that ran in Russia," Dee said.

It's got universal appeal because of its cost and its simplicity: Conversion of any bike takes less than 30 minutes with a quick-release hitch that attaches to the rear hub. A wire goes up to the handlebar for the throttle, which can be set as either a thumb or finger throttle. It quickly detaches by pulling the hitch pin.

He rode down the street to his neighbor, John Bidwell, and said, "Look at this."

Bidwell went to his garage and pulled out a small two-wheeled trailer connected to a motor he had built.

"We hooked it to my bike and it easily powered me," said Mark. "John had a patent and was selling books that told people how to build the trailer, but I figured not too many people would build it on their own."

A patent arrangement was worked out with Bidwell, and the Wangers began putting the company's wheels in motion.

Over the next year, Mark created a business plan, embarked on an investor parade and pedaled the idea around. He was able to generate interest, and on March 24, 2010 a LLC was formed.

It's been an exhilarating ride for the company ever since.

But even with the global interest, Ridekick International remains a local business, Mark said. "Ridekick is designed in Fort Collins and assembled in Loveland. All of our talent --from the design team to the marketing team to the supply chain -- is local."

That local effort is having a far-reaching impact. "This is about green energy, sustainability and also cost savings," Dee said.