Customer-owned project will produce about 116,000 kilowatts of electricity 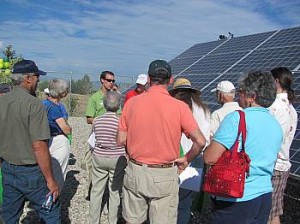 WINDSOR - Under a bright summer sun, it was a perfect day Tuesday for the dedication of the first solar garden in Northern Colorado at Poudre Valley Rural Electric Association's headquarters in Windsor.

Twenty-one PVREA customers stepped forward to sell out the garden's 494-panel array in less than 45 days, with a waiting list of other customers hoping for a second phase to reduce their electric bills through solar ownership.

Solar gardens - also called solar farms - are concentrated arrays of solar panels purchased by utility customers who may not be able to install them on their home or apartment or who don't have an unobstructed view of the sun.

The solar garden was a collaboration between PVREA and the Carbondale-based Clean Energy Collective (CEC), which builds and maintains community solar arrays.

"This new community solar farm allows us greater reach to let our customers receive the benefits of solar energy without having to build a costly system on their own," he said.

Paul Spencer, CEC founder and president, said PVREA and other rural utilities were to be commended for backing solar garden  projects made possible by the passage of the 2010 Colorado Community Solar Gardens Act, which authorized community-owned solar arrays.

"Without their commitment, these types of facilities wouldn't be possible," he said.

Spencer said the clean energy derived from the 494-panel display - over its estimated lifetime - is the equivalent of taking 17 million car miles off the road in pollution prevention and planting 24,000 trees to remove CO2 from the atmosphere.

Spencer said the 21 owners of the display - who paid $618 per panel - will save about $40 per panel per year on their electric bills.

"Together with my wife, we believe strongly in renewable energy, and to do it at home is a large undertaking," he said.

Nash said the array also helps his electric utility. "Peak energy - like afternoon energy for air conditioners - is very costly to REA, so it helps provide peak energy when they need it the most."

Mark Daily, a PVREA spokesman, said the utility is interested in a possible second solar garden, which would have to be constructed on PVREA-owned land in the three counties - Larimer, Weld and Boulder - it serves.

But Daily said that's a decision yet to be made by PVREA's board of directors.

"There's some preliminary discussions about a second phase," he said. "I think we'll just have to wait and see how this goes before a phase two."

The Windsor solar garden will generate just over 116,000 watts of electricity. PVREA has a history of strong support for renewable energy, buying 100 percent of the hydropower produced at the recently dedicated Robert V. Trout Hydropower Plant at Carter Lake west of Loveland.

The CEC is a pioneer in delivering solar power through facilities collectively owned by participating utility customers. Last year, the CEC developed the five-acre, 858-kilowatt Garfield Community Airport Solar Array near Rifle, the largest community solar project of its kind in the nation.