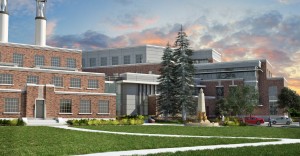 The new facility is attached to an existing 35,000-square-foot building, which once served as Fort Collins' electric power plant. The new LEED Platinum-certified building is set to officially open April 17 and is being touted as one of the most sustainable and energy-efficient to date.

It's also a cool place to work.

The EECL has twice been named one of Popular Science magazine's 25 "Most Awesome College Labs," and EECL's director, Dr. Bryan Willson, has been named to the Scientific American's honor roll for innovations that benefit humanity.

Plans are for the expanded EECL to serve as a laboratory for advanced building technology Among its innovations, the EECL will use nighttime cold storage instead of a chiller for cooling, rely on combined heat-and-power technology instead of a boiler for heating, make use of advanced LED lighting and daylighting controls, and incorporate onsite wind, solar and energy storage.

The rooftop has extra structural support to accommodate algae cultivation equipment to support biofuels research. The building also provides space for classrooms and offices for 25 startup companies, as well as faculty members with expertise as diverse as mechanical engineering and psychology.

"It's a grand social experiment," says Willson, also a co-director of the Energy Institute, which is home to a handful of energy-related academic centers at CSU. Those include a center for agricultural energy, a center for next-generation photovoltaics, and a sustainable biofuels development center.

The idea is to broaden the university's approach to energy by including not only engineers who may be working on technology breakthroughs, but also sociologists working to understand the behavioral aspects of energy consumption. Former Governor Bill Ritter's Center for the New Energy Economy will also have its office on the Powerhouse Energy Campus. Altogether, around 160 CSU faculty members will have some sort of affiliation with the Institute and its work.

The Energy Institute is an outgrowth of an initiative championed by former CSU President Larry Penley. His vision was to create three academic "superclusters," which embraced large, global issues that also benefited from considerable campus expertise. Those superclusters focused on cancer, infectious diseases and energy.

The CSU Supercluster was modeled after Silicon Valley's technology hub. In an economic cluster, a critical mass of production facilities develops. In turn, these attract other industries such as shipping, packaging and tourism. In the CSU version, the Superclusters were intended to create a critical mass of academic research talent, which would serve as a magnet for scholars in other disciplines and additional organizations or industries that could benefit from that academic research.

"The Energy Institute is the comprehensive next step in the Supercluster," said Willson.

The Institute already is undertaking a number of large studies funded by outside interests. For example, a project to inventory emissions that result from producing and transporting natural gas is being funded by the Environmental Defense Fund and a number of industry groups.

The EECL will partner with Rocky Mountain Innosphere, a non-profit corporation in Fort Collins formed to accelerate the success of high-impact scientific and technology startup companies and promote the development of a "regional entrepreneurial ecosystem" in Northern Colorado.

"The Institute doesn't undertake the same entrepreneurial support activities that Innosphere provides," Willson said. The Innosphere will manage incubator space in the expanded EECL, with a focus on startups coming out of CSU laboratories.

They may hope to repeat the success of Envirofit International. Last November, Envirofit's founders--who include Tim Bauer, Nathan Lorenz and Willson--were named Energy and Environment Innovators of the Year by The Economist magazine for their work in developing clean-burning cook stove technology.

The company developed a market-based delivery approach that the Economist's editors said pioneered the global clean cook stove marketplace. The company grew from an initial concept in the EECL 10 years ago to a global presence with an estimated 700,000 cook stoves sold across Africa, Asia and Latin America.

In addition to his CSU duties, Willson is on loan to the U.S. Department of Energy's Advanced Research Projects Agency-Energy (ARPA-E) initiative as program director. The mission at ARPA-E is to undertake development that is too high-risk for the private sector, Willson said.

As program director, Willson said he is coordinating 30 of the "coolest energy projects," which range from ocean wave technology to fabric-covered wind turbine blades, to 3D printing of electric motors. "It's heartening to me to see how much headroom there is to develop new disruptive technologies," he said.

The Energy Institute's Powerhouse Energy Campus is expected to allow for greater collaboration among CSU energy faculty across all eight colleges and ensure broad access to new facilities for faculty and industry partners. The Institute is organized through the CSU Office of Vice President for Research, ensuring university-wide access to facilities and supporting the interdisciplinary work that will occur through the Institute.

The laboratory has developed solutions to reduce emissions from large industrial engines, supported dozens of companies with new engine technology, made important contributions to basic combustion science, worked to define the architectures for the future electric grid, developed advanced biofuels, and brought clean energy solutions to the developing world.

About the Author: David Wagman

David Wagman is a Denver-based analyst and journalist who has covered most aspects of the electric power and oil-and-gas industries, and has written broadly on topics that range from international trade to commercial real estate to homeland protection in a career that spans more than 20 years.