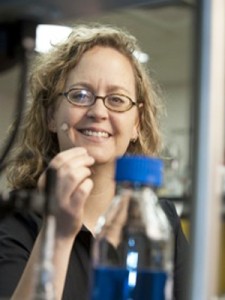 FORT COLLINS - Build a better battery, to coin an old phrase, and the world will beat a path to your door.

Fort Collins-based Prieto Battery is working to become that door, and to change how batteries are constructed and perform along the way.

Prieto Battery was the first startup launched in 2009 by Cenergy, the business arm of CSU's Clean Energy Supercluster.

Prieto said she wanted to develop a lithium-ion battery that would be a radical departure from existing batteries - one that would have a unique 3D design that would be safer, cheaper, faster-charging and more environmentally friendly than the competition.

That desire to create a truly different battery has been a long road, with Prieto and fellow researchers and students building it almost from scratch.

But the end of that journey may be drawing near. Prieto said a prototype of the battery should be ready to demonstrate by early January.

"It will be our first prototype, with lots of optimization still to do," she said. "But it will be the first time to demonstrate the architecture and that all of the elements make sense."

In order to make a battery with high energy density (i.e., one that lasts longer between charges) and high power density (i.e., one that can charge faster), Prieto's team developed a unique 3D copper foam architecture that increases the surface area of the battery's electrodes and utilizes the electrode material more efficiently than a normal flat surface.

The result is a solid state battery - with no liquid electrolytes, which are flammable, or the potential to produce toxic acid - and an "interdigitated cathode and anode."

Prieto said the most innovative aspect of the 3D battery is how it was constructed.

"I think it's the way we started building a lot of it from the ground up," she said. "We wanted from the beginning for it to be really inexpensive so everyone could afford it."

"We've had to be very careful about protecting our intellectual property," Prieto said. "We have a lot of patents filed and have been pretty careful to file them internationally, especially in Asia."

That's where the largest producers of lithium-ion batteries are located, she noted. And interest has been strong.

"We've gotten a lot of interest and pull from potential end users, people who would use it," Prieto said.

Investment in the company has come mainly from private investors. Prieto said investors were initially cautious about putting their money in an entirely new concept but that has "really shifted" in the last few years.

"We are not the first to try to build a 3D battery -- some of whom are my mentors," she said. "But there's no question that changing the technology could create some pretty amazing breakthroughs.

"We were lucky, because we got to learn a lot from the people who tried it before," Prieto added. "The challenge for (electronic) devices today is that most are limited by the battery. Lithium-ion will definitely be the dominant technology for electronic devices."

And that portends a bright future for the company, Hoffner said.

"The market is so large that when we get this to commercialization we will change the face of the marketplace," she said.

"Everything we've done is chemistry," she said. "I love making new materials - that's my passion.

"Some of the things we've figured out, like how to do this out of water, is something I'm really proud of."

Prieto, 39, is a rising star in the research world. In 2011, she was named the American Chemical Society ExonMobil Solid State Chemistry Faculty Fellow, an honor given to only one scientist each year.

And last year she was one of only 96 scientists nationwide honored with a Presidential Early Career Award for Scientists and Engineers.

Prieto said the company plans to commercialize some of the 3D battery's components next year with full commercialization of the battery in early 2015.

Meanwhile, she acknowledges that Prieto Battery is one of untold numbers of companies globally in a race to develop a better battery in a world of ever-expanding battery power needs.

But Prieto Battery just might have an edge, she noted.

"Usually, there's a tradeoff in these cases. We're really the only company that we know of that's trying to combine all of it."

Navigant: Global annual market for energy IT and cybersecurity for software to reach $32B by 2028