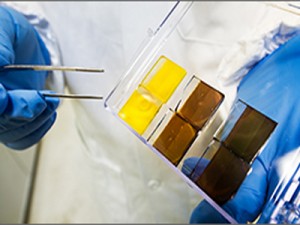 GOLDEN - A new solar material that has the same crystal structure as a mineral first found in the Ural Mountains in 1839 is shooting up the efficiency charts faster than almost anything researchers have seen before, according to the National Renewable Energy Laboratory (NREL).

NREL said the material - called perovskite - is generating optimism that a less expensive way of using sunlight to generate electricity may be in Earth's future.

NREL's researchers are analyzing perovskite using the lab's unique testing capabilities and broad spectrum of expertise to uncover the secrets and potential of the semiconducting, cube-like material.

NREL research fellow David Ginley, a world-renowned materials scientists and winner of several R&D 100 Awards, said what makes perovskite device structures so remarkable is that when processed in a liquid solution, they have unusual abilities to diffuse photons a long distance through the cell.

NREL said the new cells are made from a relative of the perovskite found in 1839. Small but vital changes to the material allow it to absorb sunlight very efficiently.

The material is also easy to fabricate using liquids that could be printed on substrates like ink in a printing press or made from simple evaporation, properties that suggest an easy, affordable route to solar cells, NREL said.

"We can help the field, especially in areas where they need help in reliability and larger development" including understanding transport or moving electrons from the solar cell to a circuit, said Ginley.

"Perovskite shows promise to be a whole lot easier to make" compared to most other solar cells," said NREL senior scientist Joey Luther, who works with nanomaterials.

"It doesn't require high-temperature processing. You can just dip glass into two chemicals and get the material to form on it.

"Every technique that everyone has used for every solar cell in the past, they want to try it on perovskite solar cells to see what they can learn."

NREL said several companies are already interested in forming cooperative research and development agreements so they can work on perovskite.