DENVER - While many environmentalists would like to see coal removed from the U.S. energy supply, the fact remains that more than 30 percent of the nation's electricity comes from coal-fired power plants.

Novinda's technology was developed in the early 2000s, when scientists at ADA Technologies received EPA funding to develop a product for mercury emission control while preserving waste fly ash to use as a Portland cement replacement.

Williams said Novinda's AS-HgX - which was named last month as one of the Top 100 technology products of the year by R&D Magazine - is the best alternative on the market to help utilities clean up their mercury emissions as required by the EPA.

"It's better for a couple of reasons," said Williams. "First and foremost, it changes mercury back into its original state, and therefore has less propensity to leach into soil or get into water. It becomes inert."

"The one other component to our process that is of substance is we do not damage the fly ash, so it can be sold for concrete and gypsum products," he said.

"Our approach allows (coal) plants to recycle fly ash and not send it to the landfill, and allows them to sell it to concrete and gypsum companies.

"All of that translates into a better economic performance."

Williams notes that Novinda has the only non-carbon mercury removal product on the market for utilities, which must meet strict EPA mercury emission control standards by April 15, 2015 or face pollution fines. 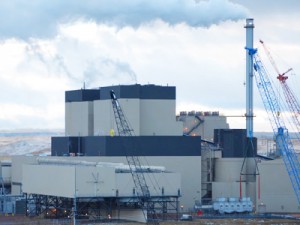 Williams said Novinda has been issued three U.S. patents, has six provisional patents and has filed 10 more patent applications for its technology.

"We have a very robust R&D team," he said. "It really speaks to the innovation behind the product."

Novinda has tested AS-HgX at more than 55 coal-fired power plants. Williams said five utilities are under contract so far.

But the future market opportunity is huge, drawing in millions in investor funds.

"It's a tremendous market opportunity for us," he said, noting an estimated $700-$800 million market in the U.S. alone. There's also a big market internationally, with Europe estimated at about half of the U.S. demand and China at $2.4 billion.

However, Williams notes that Europe and China are not bound by the same strict regulations as U.S. utilities, and those markets will unfold more gradually over coming years.

"It would be pretty disruptive to the infrastructure to just unplug (coal) tomorrow. So if it's essential to our power economy, why not clean it up along the way?"

Novinda uses bentonite clay as its primary raw material for AS-HgX and contracts with Mineral Technologies Inc. to manufacture the product in their Wyoming-based plant

Williams said he's glad to be leading a company that's making a difference in cleaning up the nation's environment.

"If we can help reduce (mercury) emissions, eliminate the need to send ash to the landfill and put these products back into use, that's huge environmentally," he said.

That is great news for the coal industry! Are the power plants aware of this and if not, how do we make it so?