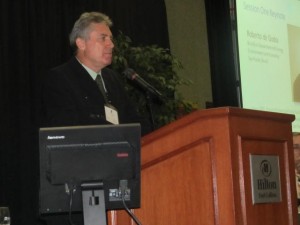 FORT COLLINS - When it comes to energy sustainability, perhaps no place on the planet is as far along as Brazil.

Blessed with a perfect climate for growing plants, the South American nation has been making significant strides toward energy self-sufficiency in recent decades.

Brazil is focusing more and more on utilizing all the energy resources at its disposal, and those efforts are now bearing fruit, said Roberto de Godoi, director of the Brazilian Department of Energy, Environment and Economy, keynote speaker for the first day of the Net Zero Cities conference held at the Hilton hotel in Fort Collins.

De Godoi said his country is producing ethanol with sugar cane, planting 8.5 million hectares solely for ethanol production. But that's only 3.5 percent of Brazil's total agricultural land, and it's had no impact on the country's food production, he said.

Meanwhile, 4.5 million jobs have been created and 40 new ethanol plants are under construction, he said.

De Godoi noted another plant - jatropha - is now being eyed for its energy and food potential, having seeds with 38 percent oil content.

"It's a revolution in terms of energy and food," de Godoi told those attending Tuesday's morning session of the conference, also referring to the plant as "Brazil's best bet" for achieving energy independence.

De Godoi was the first of a series of speakers and panel discussion participants to address the first Net Zero Cities conference, hosted by the Northern Colorado Business Report, cities of Fort Collins and Loveland, CSU Ventures, Onetribe Creative and the Bohemian Foundation.

Brazil's experience in energy self-sufficiency was but one of the examples discussed during Tuesday's sessions.

Bert Haskell, technology director for Pecan Street Inc. in Austin, Tex., described how that city has been collecting data on a residential district that is focused on solar-powered homes and electric vehicles.

Haskell said the project aims to reveal whether the district's energy-saving lifestyle is sustainable.

"We're concerned with the kind of lifestyle that can be achieved with these technologies," he said. "It has to be a better lifestyle or people won't adopt it."

Haskell said the project is "going very well" but couldn't say whether it might be scalable to an entire community.

"Our strategy is to engage the early adopters," he said. "They're patient, interested and tech-savvy - they're really the best target."

The City of Fort Collins is collaborating with partners at Colorado State University and the private sector to create FortZED, a zero energy district that includes CSU and the city's central business district.

"Nobody's really done that yet," he said. "That's why it's important for cities and universities and private entities to come together to make it happen. I'm really excited to see Fort Collins take a leadership role."

Steve Catanach, Light and Power manager for the city of Fort Collins, said the city is in the process of replacing home electricity meters with advanced metering devices that offer a "web portal" for city residents to closely monitor their power use in real time.

"We're not seeing banks being interested in financing those additional features," he said. "We know it brings down costs, but making banks see that is one of the difficulties we're facing right now."