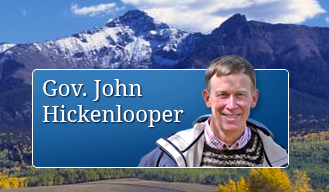 DENVER - Gov. John Hickenlooper and three other governors have sent a letter to Congressional leaders urging them to extend the wind production tax credit set to expire at the end of 2012, according to a story in today's Denver Post.

The other governors - Republican Terry Branstad of Iowa, Republican Sam Brownback of Kansas and Democrat John Kitzhaber of Oregon - cited wind industry layoffs as their reasons for concern about the expiration of the tax credit.

"Thousands of jobs in the wind industry have already been impacted by the credit's looming expiration and thousands more are at risk," the letter said. "We urge you to take swift action to extend the PTC before the end of this Congressional session."

The credit amounts to 2.2 cents for each kilowatt-hour of electricity a wind farm produces and has been a primary factor in funding construction of the facilities.

Vestas Wind Systems -- Colorado's largest wind industry employer - has cut about 500 jobs this year largely because of the slowdown in wind turbine orders due to uncertainty over the PTC's extension.

Guidehouse: Electric Vehicles expected to account for over 20% of global light-duty vehicle sales by 2030