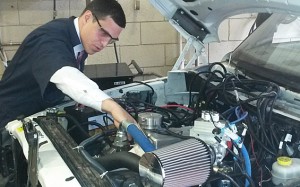 FORT COLLINS - Natural gas is relatively cheap and plentiful, but a lack of natural gas vehicle (NGV) refueling stations and the time it takes to refuel is holding back adoption of the environmentally friendly technology.

A Fort Collins engineering firm is working with an Oregon-based company to develop a next-generation natural gas engine that can refuel the vehicle from any low-pressure natural gas service line.

Czero is partnering with Onboard Dynamics - a spinoff of Oregon State University-Cascades - to reconfigure a natural gas engine to use one or more of its own cylinders to compress gas from low-pressure natural gas service lines for vehicle self-refueling.

The idea is to make NGVs more attractive by allowing them to be refueled anywhere using existing infrastructure, said Guy Babbitt, Czero co-founder and CEO.

"It's the proverbial chicken-and-the-egg," says Babbitt about car buyers shying away from purchasing natural gas vehicles because of the refueling issue.

"The reason (NGVs) are not in widespread adoption is there's that refueling anxiety," he said. "There are 60 million sites (homes and businesses) in the U.S. with low-pressure natural gas. We have this infrastructure all around us."

The project, underway for the last two years, recently got a big boost when the U.S. Department of Energy's Advanced Research Projects Agency-Energy (ARPA-E) awarded $3 million to Onboard Dynamics to begin commercialization of the dual-function engine technology.

The DOE award followed an original $1 million award that went to Oregon State University for the proof-of-concept.

Rita Hansen, Onboard Dynamics CEO, said Czero - a work-for-hire engineering company specializing in "things that haven't been done before" -- is a great partner for the project.

"We chose Czero since they have a stellar reputation for innovation and expertise in the automotive industry," she said. "They also have a proven track record and prior history with the original inventor -- who is on our team -- that has already resulted in huge successes in meeting critical milestones and performing to expectations."

Babbitt said the project has already produced a working prototype at Onboard's facility in Bend, Ore.

"We demonstrated that to the DOE about a month ago," he said. 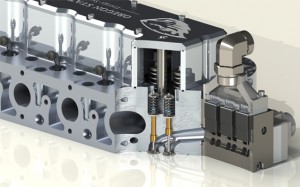 With the reconfigured natural gas engine, a NGV owner would simply drive into his or her driveway, shut off the vehicle and connect the engine to a dedicated natural gas line similar to those that supply water heaters,  furnaces and other gas-powered appliances.

One big obstacle yet to overcome is the longer time it takes to refuel an NGV compared to filling up at a gas station.

Babbitt said the goal is to get refueling time down to one hour or less - something that can easily be done overnight or even on a lunch hour.

Hansen said NGV owners could save more than 67 percent in fuel costs with the onboard compression system, based on an average $3.70 per gallon cost of gasoline versus $1.15 for a Gallon Gasoline Equivalent (GGE) of natural gas.

Hansen and Babbitt said the initial market target for the dual-function engine will be small commercial fleets of light-duty pickups.

Babbitt said the nation's Big Three automakers - Ford General Motors and Chrysler - already have bi-fuel pickups that can use gasoline or natural gas, but "they really aren't getting the market penetration they would like."

Hansen said initial talks have begun with the automakers.

"We have had very preliminary conversations with the Big Three...but it is premature until we have a demonstration vehicle on the road with our integrated technology," she said.

Babbitt said he expects a next-generation, dual-function engine will be ready for final testing within a year. He said the project has gone very smoothly so far.

"A lot of times you get into these projects and more and more problems crop up ," he says. "But with this one, everything seems to be falling into place."

Babbitt said the dual-engine NGV technology "could be the tipping point for widespread adoption of natural gas vehicles.