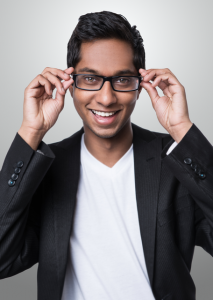 GREELEY - Some might say Raj Reddy was born ready.

Reddy, a 19-year-old sophomore business management major at the University of Northern Colorado, has been on an innovation fast track since he was in high school.

That's when Reddy, an avid creative software enthusiast, started work on his own mobile app video game that's now available on Apple devices. The game, called "Short Order Slam," is about farming ingredients, packaging them at the factory and cooking them for the dinner table.

There's no guns, blood or gore, but Reddy believes it's focused on something that could appeal to anyone - food.

"It's about food, so what is more relateable than that?" says Reddy.

And there's a little bit of an outlaw element to it as well.

"Players have the option of bribing the health inspectors," he says with a grin. "It's a game that encompasses freedom without a set of rules."

Perhaps just the kind of approach any two high school students might take if they had the skills and drive of Reddy and his company co-founder, James Dinneen.

The two met in biology class at Littleton High School and Dinneen joined the company about six months later. Dinneen is also now a university student, attending Colorado College in Colorado Springs, but the two communicate with each other every day. 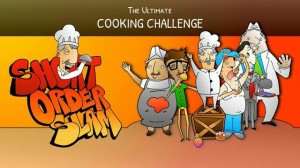 The two founders did most of the initial work on the app, then enlisted 17 fellow students to help finish the game.

"They've been pretty phenomenal and have done incredible work, and we wouldn't have been able to move as fast without them," says Reddy.

Getting the money to fund the game's completion was not an easy thing, especially because Reddy and Dinneen vowed not to ask their families for an investment.

"One thing James and I promised each other was to never take money from our parents," he said. "We wanted to prove that this could happen to any other high school student. Using family money wouldn't have been fair."

Fortunately, there was someone who could bring some money to the table and get the game off the launch pad: Curt Richardson, founder of OtterBox in Fort Collins, who valued their idea at around $500,000 when he invested  to advance the project.

"He invested in us, which was phenomenal and really validated what we were doing and that high school students can have good ideas," says Reddy.

Looking back, Reddy says he didn't set out to create "Short Order Slam" for the money but simply focused on his goal of creating a mobile app that people might want to play.

"We didn't do this for the money," he says. "We just thought it was cool. I thought about what would be the best way to bring creative people together to work on ideas. That's how it eventually became a company.

Reddy's company is called Omirown. "We wanted to pick a unique name that people would remember."

Reddy said he's learned so much in three short years. One thing, he notes, is to stay focused on what you love.

"It's not about planning to be successful, but to be worthy of success," he says.

Ryan Speir, former director of the UNC BizHub accelerator in Greeley and the Innosphere startup incubator in Fort Collins, was among the first to see the potential in Reddy and expects big things from him and Omirown.

"The world will soon see how a group of fun-loving, focused college students can start up a business and challenge corporate titans head to head," says Speir.

Speir introduced Reddy to OtterBox's Richardson, and the two quickly hit it off.

"When I first met Raj, right away I was intrigued with his story and his passion for business and for life," Richardson said. "I don't think you can become an entrepreneur. I think you're born an entrepreneur.

"I believe Raj has the DNA of a great entrepreneur. I expect to see him on the front (cover) of Inc. magazine."

"Having Curt as my mentor is one of the biggest honors I've ever been given in my life," says Reddy. "In our mentorship sessions, I learned more about business in two hours with Curt than I did in an entire year sitting in a classroom."

Reddy has this advice for young entrepreneurs: "You don't have to have everything figured out from the start - just go out there and do it."

Short Order Slam officially launched on New Yer's Eve after years of  hard work. By the end of the first week, it had active users in 11 countries around the world.

So far, Reddy's entry into the world of innovation and software technology has been very satisfying.

"For me, creating something out of basically thin air and shipping it out to the world with a click of a button - that's my favorite thing," he says.

Reddy acknowledges it's been an amazing journey for a 19-year-old in his second year of college.

"If you'd told me everything that's happening today when I was 16, I would have said you were crazy."

Short Order Slam is available for free download on the Apple App Store at https://itunes.apple.com/us/app/short-order-slam/id852050261?mt=8.