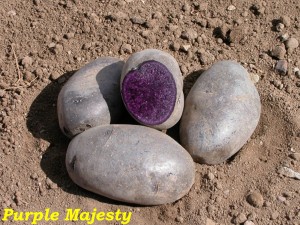 SAN LUIS VALLEY - While consumers have become increasingly aware of the health benefits from diets rich in fruits and vegetables, potatoes have not generally been recognized for their beneficial qualities.

But Colorado State University research on the development of a healthier potato may be about to change that perception.

Dr. David Holm, a potato breeder and 34-year researcher with CSU, has been part of the development of what some may consider to be the next item on the list of super foods -- the Purple Majesty Potato. Because the incredible health benefits of this tuber may very well revolutionize the potato industry.

"The Purple Majesty has very high antioxidant levels," Holm said. "These antioxidants have been shown to reduce blood pressure as well as have anti-cancer properties."

The potato has four times the level of antioxidants than regular white potatoes. Antioxidants in these potatoes reduce the amount of free radicals in our bodies that play a part in cancer, heart disease, stroke and numerous other diseases.

"The Purple Majesty is possibly the first potato developed and documented to have such high levels of antioxidants," said Holm.


As its name suggests, the Purple Majesty's skin and insides have a deep purple color, which is due to an abundance of natural plant nutrients called polyphenols.

These polyphenols are also found in nutrient-rich foods such as blueberries, black currants, red cabbage and red wine.

Science has shown that consuming colorful foods like these is beneficial in promoting good health and preventing disease.

One of the more recent discoveries with the Purple Majesty potato is its potential effects on colon cancer. CSU researchers and PhD student Tatiana Zuber have been studying specific properties that certain potato genomes, including the Purple Majesty, have on the inhibition of colon cancer cell cultures.

CSU's research with colon cancer cell culture inhibition properties has been completed and the promising results will soon be reported.

The Purple Majesty has been developed through years of traditional plant breeding and is not genetically modified. The genotype cross for this potato was first made in 1994, and after years of breeding it was first commercialized in 2005.

Colorado State University's potato research is based out of the San Luis Valley Research Center in southern Colorado. The area is the highest and largest commercial agricultural valley in the world.

The valley experiences a shorter growing season due to the high altitude, but "the high solar input allows the crops to grow much quicker," said Holm. "Potatoes grow faster here than anywhere else in the world."

The 90 square miles of production in the San Luis Valley -- combined with another growing region in Northern Colorado -- makes Colorado the fifth-largest potato grower nationally.

The purpose of CSU's work in the San Luis Valley is to help ensure the Colorado potato industry remains productive and competitive.

Potatoes have the highest daily per capita consumption of all vegetables in the U.S., and they are the world's fourth-most-important crop after corn, wheat and rice. CSU's development of this nutrient and antioxidant-rich potato may revolutionize the potato industry on a global scale.

"I think the thing I see shifting is that consumers will be looking more and more at the health aspects of potatoes," Holm said. "As consumers become more aware of the other health attributes they possess, they will seek out varieties that have these additional traits such as high antioxidant levels."

The Purple Majesty is not yet distributed in mainstream grocery stores in the U.S. But, according to Stushnoff, "there is a lot of interest among consumers and there has been increasing production and marketing in recent years, including in the United Kingdom."

For those who would like to get their hands on these new purple potatoes, they can be found at specialty grocery stores and farmers markets around Northern Colorado. With enough consumer demand, they may soon find their way into mainstream grocery stores.

About the Author: Hannah Toole

Hannah Toole is an outdoor enthusiast and incredibly passionate about community development. She has fallen in love with the community in Fort Collins and plans to stay for a long time. She is the member relations coordinator at Cohere Community (a coworking office in town) and also the organizer of TEDxCSU.

they are also incredibly delicious, way outclassing normal spuds. you get over the colour change pretty fast.


Absolutely love this potato. It's really producing quite a high yield here in Kenai, Alaska.