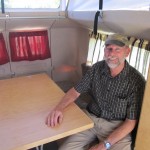 LOVELAND - For Lawrence Drake, innovation inspiration came from a practical need: What kind of trailer could he build that a small car could pull?

A love of trailer-camping demanded something be crafted so Drake could still get out and get away from it all behind the wheel of his car.

"I'd just gotten rid of my pickup," he said. "I looked around for something my small car could pull, but there really wasn't anything out there."

So Drake, retired founder of the Radiant Panel Association, decided to tinker with some ideas in his home shop. What he eventually came up with is an ingenious design for connectable panels that even the least-skilled toolsmith could quickly assemble into a sturdy camper trailer.

Or just about any of a dozen other things -- limited only by one's imagination.

Drake patented his technology last December.  The 21-inch-wide Teal Panels are made from polyethylene plastic and foam and are light but rugged. "You could throw them off a building and it's just going to bounce," Drake said.

The modular panels have built-in weather stripping and connect together with just a few screws. Their connectability allows the builder to customize the construction of the camper.

Or hunting blind. Or ice-fishing hut. Or personal yurt. Or whatever.

"It initially started out as a camper, but then I thought: There's a world of possible applications here," Drake said.

Drake opens his original prototype camper - which sits on a standard utility trailer - and reveals its roominess, especially with a pop-up, screened top that allows a 6-foot person to walk in it without ducking.

A dining table disassembles into a bed, with the table cushions converting into a mattress. There's even room for a porta-potty.

For Drake, his Teal Panel project has kept him focused in his retirement years. "I was looking for what I needed to do next," he said. "This kind of hit me and it's been a lot of fun."

And there's been a boiling up of interest since he put videos of it on You Tube. Drake said the videos have had more than 140,000 views, with 50,000 unique visitors a year from 25 countries. He said interest in using the Teal shelters for emergency and temporary housing is growing and may outweigh any recreation or sporting use.

About 350 viewers said they'd like to be dealers of the product, he said.

Drake said he's taken his product as far as he can financially and is now looking for a partner.

"I'm looking for either a very active partner with the skills and assets and capabilities to take it to manufacture or someone to buy it outright," he said.

Drake recently presented his idea to the SAGE group at the Rocky Mountain Innosphere in Fort Collins. SAGE, or Social and Advisory Group for Entrepreneurs, gives entrepreneurs the opportunity to pitch their concept to a group of advisors and receive feedback and ongoing support.

Drake said he also has a strong group of his own personal advisors to help him go forward with his invention.

"There's a real wealth of experience to tap into, and I can't help but think there's going to be a real positive result," he said.