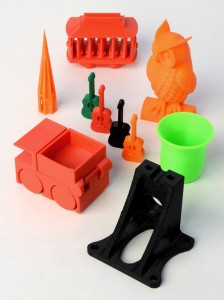 LOVELAND -- The plastics industry - already the third-largest manufacturing industry in the U.S. -- better get ready for the technological revolution coming its way.

A Loveland company has developed a 3-D plastics printer that is transforming the plastic manufacturing industry and opening up new opportunities for hobbyists, business owners and entrepreneurs.

Over the past year or so, numerous stories have been written about 3-D plastic printers that are entering the market. But Aleph Objects -- founded in 2011 -- is shaking up the industry by producing a high-quality, affordable printer that's well suited for companies and hobbyists alike.

The average 3-D plastics printer costs $70,000. Compare that to Aleph Objects Lulzbot AO-100 model, which costs only $2,500 and is the fastest desktop printer on the market today.

AO's printer is intended for creating smaller products and can print a unit up to the size of 8x8x4 in. It is also four to five times faster than any other 3-D desktop printer on the market.

What's the buzz about?

So what is all the excitement about these 3-D printers?

Well, the majority of all plastics are typically formed from molds, whether it's parts to a machine, your kid's Legos, or even your plastic water bottle. The process of creating and using molds can be very expensive and time-consuming. But AO's new 3-D printer technology completely eliminates the use of a mold by "printing" the object right in front of you.

The LulzBot AO-100 desktop printer works by melting the plastic, which is then fed through a nozzle creating one layer of plastic at a time. Layer upon layer is built up until the finished product is done.

The entire process is controlled by a computer and can be altered or changed at any time.

"It is considerably less expensive and takes far less time to print a part using our printer than it is to have, let's say, an injection-molded part made," said Mike Fitts, Aleph Objects' business development manager. "I would say there's magnitudes of difference in both cost and time."

A typical mold can cost upwards of $5,000 and take a few weeks to make. With a 3-D printer, the part can be made the same day it's designed and the cost is far lower.

"We are in a unique position when you look at the 3-D printing industry as a whole," said Fitts, "We are actually redefining the 3-D printer marketplace as our printer spans the current multiple industry categories that have mostly been based on price and how the printer was developed."

The affordability and quality of their printer is opening up all sorts of opportunities for large production companies, small businesses and even hobbyists.

The printer will create "huge opportunities for a wide variety of people and businesses to engage in making new designs," said Jeff Moe, owner of Aleph Objects. "Industrial design will accelerate at an unprecedented rate."

With the barrier of cost eliminated, anyone with $2,500 can buy a printer and start his or her own small business.

One AO customer, Landon Cox, started a company called Twin Dolphin Timing. Cox uses the A0-100 to print parts to make timing systems for speed climbing competitions. He purchased the printer on a Wednesday and within 10 days he had printed and sold several systems that were used in the Atlanta 2012 National Speed Climbing competition.

The affordable printers are also helping advance innovations in research. The chemistry department at Colorado State University has purchased two of the printers and is using them to create low-cost products for medical and environmental testing.

The printer and accompanying software are designed to make it easier for anyone to get into the business of printing plastics.

Don't know how to create a 3-D model? That's OK, because you can still print things by easily downloading thousands of designs from the free open source website, thingaverse.com. The 3-D designs can then automatically be uploaded to the printer.

Aleph Objects has actually contributed to the designs on thingaverse.com.  All programs and software created by Aleph have been uploaded to open source websites like Thingaverse.

The A0-100 printer was actually developed through crowd sourcing on the Internet. Through collaboration, they were able to build upon other technologies to create their printer.

"There are many people collaborating around the world to build 3-D printers and improve designs," said Moe. "We are a part of this ecosystem. We draw from this collective knowledge and we give back as well."

All of their technology is under a creative commons license and accessible to anyone. They provide all of the design files, software, spec sheets and bills of materials for the AO-100. Anyone interested in building a printer at home can download all of the technology and information at download.lulzbot.com.

Aleph Objects embodies the concept of 'Next Generation Manufacturing,' which is all about sharing technologies to advance innovation. Moe believes science and technology should be open and that this will result in the most benefits for society.

"We have seen how the more closed a society is, the worse off it is," he said. "The last decade has shown clearly how free, open systems and collaboration can easily outpace closed, proprietary designs."

Since forming the company in January 2011, they have sold more than 200 printers. Aleph Objects said it is hitting the 3-D marketplace at an optimal time.

"As our local, national and world-wide marketing efforts kick in, we anticipate exponential growth," said Fitts.

About the Author: Hannah Toole

Hannah Toole is an outdoor enthusiast and incredibly passionate about community development. She has fallen in love with the community in Fort Collins and plans to stay for a long time. She is the member relations coordinator at Cohere Community (a coworking office in town) and also the organizer of TEDxCSU.