DENVER -- Thanks to Hall-of-Famer Eric Dickerson and hardware from one of Denver's newest high-tech tenants - Pivothead - the St. Louis Rams treated their fans to some up-close-and-personal videos of the team's Sept. 8 meet-up with the Arizona Cardinals.

Wearing one of Pivothead's point-of-view HD cameras, which are integrated into stylish sunglasses, Dickerson and others were able to record video of the game's coin toss, team huddles and fan high-fives from the point of view of a participant.

And more such opportunities are on the horizon. On Oct. 23, Pivothead and the Rams announced a partnership that will extend through the 2013 football season. The goal is "to capture and publish exclusive behind-the-scenes and fan-perspective footage," according to a press release.

This opportunity feeds into both short-term and long-term strategy for Pivothead, according to the company's North American Operations Director Zach Barbitta. The next step in the long-term strategy is live HD video streaming from the playing field.

"The big ticket is letting fans see inside the helmets of players in live HD, so they can see what it's like to be the running back or the wide receiver," Barbitta said.

Pivothead is fine-tuning this technology now for release some time next year, and Barbitta is proud of the progress they've made. "Getting a stream of that quality video out of something that small -- particularly when you consider battery/power-consumption needs and just the physical space -- was quite the feat," he said.

Getting the technology right is part of what drove founder and president Chris Cox to originally perfect the concept of a video camera in a pair of glasses. But the first prototype was disappointing. "They were cheap, flimsy, uncomfortable, only came in one style and had horrible imaging quality," Cox recalls.

But Cox trusted his instincts and pushed forward. "Done right, with technological advancements in imaging, this was going to become a mainstream product one day. I started allocating resources to it, and that kicked off a very long journey."

That was in 2010. Pivothead's first generation of "wearable imaging" sunglasses launched in 2012 and now features four styles: Durango, Moab, Recon and Aurora. All four styles have the same technology, consisting of an 8 megapixel (MP) Sony CMOS-based image sensor with 2GB of RAM, an additional 8GB of internal memory, a 44.1 KHz microphone and a 440 mAh lithium polymer battery.

Controls, LED indicators and a micro USB port - for downloading the images - are housed in the left arm of the glasses.

The camera offers a variety of image options, including burst and time-lapse video and still pictures, at any of several quality and exposure settings. The camera's highest setting for HD video, 1080p, 30 fps (1080 horizontal lines of vertical resolution), is also known as "full HD," an industry standard.

Pivothead technology also encompasses a range of accessories, including chargers, connectors, cables and flash drives. The newest addition, the Air Sync, is a small 3-in-1 device released in mid-October that "lets you control, power and store," said Barbitta. It has a 2500mA battery pack for charging on the go, an SD card slot for downloading the glasses' stored images and a Wi-Fi router that lets you control the glasses from your smartphone.

Another accessory, the Go Pack Professional, allows Pivothead to reach beyond the adventure sports and team sports markets to commercial markets such as law-enforcement and security. "(Pivothead) is a good solution for a lot of their needs," said Barbitta. "So the Go Pack was designed with them in mind." 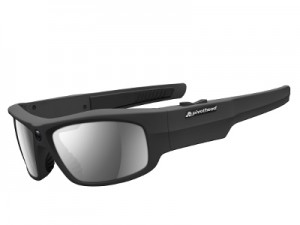 What differentiates Pivothead in all of these industries is the form factor - that is, a camera built into a pair of glasses versus held by a helmet or body strap. With Pivothead's glasses, weekend adventurers and tourists not only have their hands free but also are able to record their "true" point-of-view.

The result is "direct-eye-contact shots where people are not posing for a camera, but rather looking into your eyes," said Cox. Plus the lack of invasiveness "makes Pivothead a great storyteller," he adds.

An early reviewer of Pivothead products, Terrence O'Brien of engadget online, wrote that while he was skeptical about this design at first, he was "pleasantly surprised" by the detail and color in the image quality. He applauded the amount of detail recorded "even when charging down a hill at about 26mph on a bike."

And word seems to be getting out. Pivothead is being embraced by the retail market. A distribution partner, Synnex, has made connections for the young company in the consumer electronics market. Other connections have reached out directly, including Sunglass Hut and Sports Authority, according to Barbitta.

Pivothead is responding to this growing consumer market. In addition to developing HD video streaming capability, the company has been redesigning their sunglass product based on customer input, Barbitta said. Along with this second-generation product, Barbitta also hopes to soon release an open API for use by software developers.

The variety of customer uses, as witnessed by videos uploaded to YouTube, is a source of pride for the Pivothead team.

"Honestly, we didn't know what people were going to do with the (glasses)," Barbitta said. "But the answer is everything - from soccer parents watching soccer games to police videos to pilot videos to mountain biking. It's really fun to see what people create with our cameras, because at the end of the day that's the business we're in - creating cameras for people to record what they're passionate about."

About the Author: Debra Kahn

Debra Kahn is a professional communicator and program manager with many years of experience in high tech. A long-time resident of Larimer county, she holds degrees in English from Colorado State University and the University of Northern Colorado. She has been the past recipient of technical writing awards from the Rocky Mountain Chapter of the Society for Technical Communication. She is also a certified project management professional (PMP).