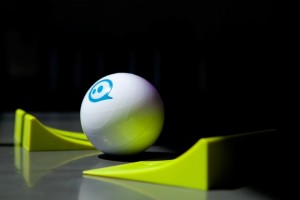 BOULDER - Orbotix, maker of the Sphero robotic game ball, today announced it has reinvented the ball with Sphero 2.0.

The redesigned ball and game system is now faster, brighter and smarter than ever with new accessories, the company said.

"The first time I drove Sphero 2.0, I passed out," said Ian Bernstein, Orbotix co-founder. "Sphero 2.0 has been re-engineered from the ground up to give the user an entirely new gaming experience.

"It's kind of like Einstein and C-3PO had a baby."

Powered with new AI Superdrive, Sphero 2.0 can reach speeds of up to 7 feet-per-second, Orbotix said. The product's internal robot has been reconfigured for optimal performance, including a more efficient drivetrain and lower center of gravity.

Sphero 2.0 also comes with new accessories, including new ramps and all-terrain Nubby covers for protection from the elements and better traction.

Pre-orders for Sphero 2.0 open today on Brookstone.com and on GoSphero.com. The product will be available worldwide starting Aug. 30 for $129.99.