LOVELAND -- How does a person go from gymnastics coach to entrepreneur? For Kyle Kirkpatrick, founder and CEO of Loveland-based Decibullz, it was a classic case of necessity fostering invention.

It's fair to say Kirkpatrick is a little more active than most of us. Besides training Olympic-level gymnasts, he's an avid runner who has also competed in everything from rollerblading to snowboarding.

"The activities I do to stay in shape and to have fun are so vigorous that no earphones would ever work. With all the jarring movements and such, nothing stayed in my ear," he says.

And while that may not seem like much to you, it was a concern to Kirkpatrick. "Music really makes a difference to me," he says. "I'm the type of guy that, if I'm going to the gym and I don't have my headphones, I don't go."

In fact, it was a big enough concern that he decided to invest a couple hundred of his hard-earned dollars in the quest for the perfect earbuds. "But even at that price-point I couldn't find anything I liked. They were uncomfortable, they fell out, they were just awful," he recounts. "I really couldn't find any that worked for me."

That's when he began looking at custom-molded headphones. But they were even more expensive, with most starting somewhere around $400 a pair.

"I grew up in a pretty modest environment, where if you couldn't afford something you just did your best to try and make it. And that's basically what happened," Kirkpatrick says with a chuckle. "I figured I would make my own custom-molded headphones - how hard could it be, right?"

So for the next several months, experimenting with various materials and audio components became something of a hobby. Kirkpatrick figures he went through hundreds of prototypes before stumbling upon what felt like the right combination. Even so, he had no real plans to do anything more than turn out a few sets of earbuds for himself and some acquaintances.

Which is exactly what he did.

"Since I didn't have much money, for Christmas of 2012 I decided to make my friends and family custom-molded headphones," he explains. "That's what everyone got from me that year."

It was those friends and family members who pushed Kirkpatrick to think bigger and consider going into business. "At first I figured the idea was too stupid, that someone out there had to already be doing it or had it patented."

But after a quick search he found that there wasn't anything similar to what he was making, so he sold his car to pay for the patents. 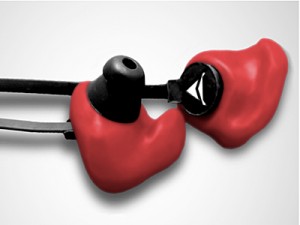 Another hurdle was the fact that he knew almost nothing about running a business. Fortunately, there was someone who did. The father of one of his gymnasts happened to be Gary Salomon, founder of Fastsigns, Inc.

"I invited him out one day just to say 'I'm ready to start this little business and I don't know anything, could I buy you coffee and you give me some advice?'"

And despite Kirkpatrick's total lack of experience, Salomon recognized an opportunity - and potential - when he saw it. After a few more meetings -- and completely unsolicited -- he offered to come on board as an investor.

That proved to be the incentive Kirkpatrick needed. Decibullz was started in his garage in early 2013 with a few thousand test units. Then, in May of 2014, the company won CSU's Blue Ocean Enterprises Challenge, a business pitch competition designed to promote entrepreneurs and innovators in Northern Colorado.

As the Challenge's first winner, Kirkpatrick says the $250,000 prize has provided a "turbo-boost" for his business.

"We were moving pretty quick and growing at the time, but that influx of cash and the mentoring from Blue Ocean has really enabled us to ramp up a lot faster and a lot safer." He credits Blue Ocean with putting the proper systems in place so Decibullz could grow with a stable foundation, while also helping to develop new products.

Signs of that growth are evident. "Last July we moved into a 700-square-foot facility, which we outgrew in a few months," Kirkpatrick recalls. "So now we're in a 1,400-square-foot warehouse and my goal is to outgrow that in another 6 months."

It's a goal that seems totally doable. Kirkpatrick says this past holiday season was their biggest by far - so much so that they just hired another full-time employee to handle the firm's marketing needs.

And Decibullz is already eying new sales opportunities, including not only hearing protection but applications where people are required to wear earpieces as part of their job, such as the military and first responders.

Kirkpatrick admits there's a long way to go. "We're still facing all the challenges of a normal small business as we're growing and learning," he says.

But so far it's all been music to his ears.