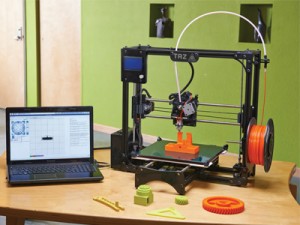 New to the TAZ 2, the printer features an LCD display with an SD card that allows users to make prints without being attached to a computer.

The printer has the largest build-volume of any printer in its class, the company said, totaling approximately 12 in. X 11 in. X 10 in.

"At Aleph Objects, we're continually evolving our LulzBot 3D printers to not only meet marketplace needs in real-time, but to also raise industry standards for 3D printing as a whole," said Jeff Moe, company president and founder.

"Our latest printer, the TAZ 2, represents our community-driven approach by capturing the best-in-class in ideas from engineers and innovators around the world."

The LulzBot team is partnering with Fundable to leverage the power of crowdfunding to further scale their business and meet high customer demand and has already raised nearly $229,000 on the Fundable platform.

The TAZ 2 can be pre-ordered through Oct. 31 via www.fundable.com/lulzbot-taz.