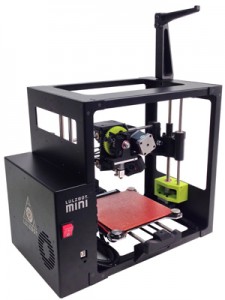 LOVELAND - Aleph Objects Inc., an open source hardware company, today announced the official launch of the latest addition to the company's line of LulzBot 3D printers with the introduction of the LulzBot Mini.

The new printer is being debuted at the 2015 Consumer Electronics Show in Las Vegas that runs Jan. 6-9.

Unlike most common products developed secretly behind closed doors, Aleph Objects said it shared every step of the LulzBot Mini's development through a publicly accessible archive updated hourly that includes specifications, schematics, parts, suppliers and more for every prototype the company has built.

"Thanks to our active community, the LulzBot Mini is coming to market with technology that has already undergone thousands of hours of use and testing," said Jeff Moe, Aleph's president and CEO.

"It's this ongoing dialogue with our users that has not only driven and informed the development of the new printer, but also enabled us to deliver a 3D printer that we believe is best in its class."

The new printer features a heated bed that self-levels during the startup process and has the ability to print a wider variety of materials than most 3D printers, Aleph said.

Aleph said the LulzBot Mini lists for $1,350 and will be available for purchase at the end of January through LulzBot.com, Amazon and other outlets.