FORT COLLINS -- Colorado was built on the availability of water, and that legacy continues to the present day -- even though half the state remains a dry, high desert most of the year.

But with an ever-growing population, Colorado’s once-plentiful water supplies are facing a tipping point by 2050 or before. 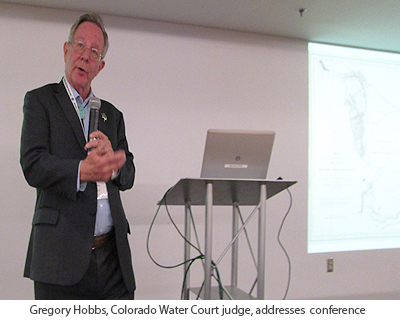 Water experts from across the region came together Monday on the Colorado State University campus to hear what’s new in water innovation and how new ideas might help the state cope with population growth in the face of recurring drought and legal obligations to downstream states.

Gregory Hobbs, a former Colorado Supreme Court justice and now a senior water judge in the mediation of Colorado Water Court cases, led off Monday’s “Western Water Symposium” with a recital of Colorado’s water history up to and after the Civil War and after statehood in 1876.

Hobbs, a renowned authority and author on Colorado water issues, said the state -- with several rivers emanating from its mountains and forests and ultimately flowing into surrounding states -- has been in a unique position when it comes to establishing water law.

“We are the foremost water jurisdiction in the world, as far as I’m concerned,” Hobbs said.

Over the years, Front Range Colorado has waged battles with downstream states, the Western Slope and even among Northern Colorado communities Fort Collins and Greeley over water rights.

The result of those water fights eventually led to the creation of laws, regulations, plans and multi-state compacts that today set the stage for a more cooperative environment among Western states and intra-state communities.

A big part of reaching those goals, Stulp noted, is enhancing water conservation efforts across the state.

Stulp said those efforts are being aided by innovations in land use development, with developers investing in water conservation projects and innovations in agriculture, such as better genetics for higher crop yields, drip irrigation and GPS telemetry for more precise planting.

Stulp said it’s “inevitable” that some ag land will be lost to development as the population grows, and he noted that 100,000 acres of former ag land have already been converted in the Arkansas River valley and 200,000 acres in the Platte River valley.

“But ag output is higher than it’s ever been before due to technology,” he noted.

“We have some amazing technology that we can make water go further and squeeze more use out of it.”

“I think we’ll see more range-fed beef, but it really depends on the economics of it,” he said.

But Stulp acknowledged meat producers will have a greater role to play in conserving the state’s water as time goes on.

“(Meat production) is an important part of the economy, but it, too, will have to explore its water-use footprint.”

Jennifer Pitt, Colorado River Program director for the National Audubon Society, said she worries about the state’s water storage situation.
“Our reservoirs on the Colorado River basin have been at about 50 percent for the last decade,” she said, noting that 36 million people along the Colorado River depend on it not drying up.

“We are not today facing a catastrophe, but we don’t yet have the brakes we need to avoid one,” she said.

“Our laws were set up in the 19th century, our infrastructure was built in the 20th century, and we’re not always able to take care of our rivers the way we want to.”

In spite of those facts, Pitt said she remains optimistic about the state’s water future. She said Colorado and the states that are part of an interstate compact to use the Colorado River are working together to find ways to sustain the resource.

“With the challenges we’re facing, the states have really been motivated to increase the reliability of their supply,” she said.

Patrick O’Toole, whose family is in its sixth generation of ranching just across the Wyoming border, said he’s concerned that the region’s water supplies have been dwindling.

“We’re watching a shrinking resource,” said O’Toole, president of the Family Farm Alliance. “In the last few years we’ve seen big snowpacks, but because of warm springs that water is going away much faster.”

“I’m all about conservation, but in reality it’s going to be controlled by how much water is available,” he said. “Small strategic storage is going to be the answer.”

However, a complicating factor to that approach in Colorado is the compact agreements with downstream states that say the state can only keep one-third of the water that originates in it.

Greg Fisher, manager of demand planning for Denver Water, said the good news in Denver is that the city reached its “max date” -- the day it used the most water ever -- in 1989, when it consumed 550 million gallons.

Since then consumption has dropped and is now averaging about 360 million gallons a day.

“I think our attitudes and our values have changed” since 1989, he said.

Fisher also attributed some of the water use reduction to increased xeriscaping and energy and water-efficient dishwashers and clothes washers.

“One of the reasons we need innovation is to accelerate a move to more efficient appliances,” he said.

“We want to work on these common challenges together,” he said. “We’re really optimistic and excited about this.”

One focus for his company is the reuse of brackish water -- ground water with a high saline content -- which he said could help triple the available water supply.

But there remain obstacles, he said.

“We’ve come up with technologies that are addressing that issue, but the acceptance issue is going to be tough.”

Fisher agreed with that assessment.

“For over 100 years we’ve been relying on this great water source, but that’s going to change over the next 100 years,” he said.

“We need to change hearts and minds. The technology is there, but the acceptance isn’t there yet.”

Monday’s Western Water Symposium was also a fundraiser for the Water Resources Archive at CSU’s Morgan Library, where the state’s water history documents are professionally maintained.