BROOMFIELD -- Coal has long been a mainstay of the region’s economy, but growing public opinion favoring a shift to solar and wind power due to coal's perceived impact on climate change has the industry reeling. 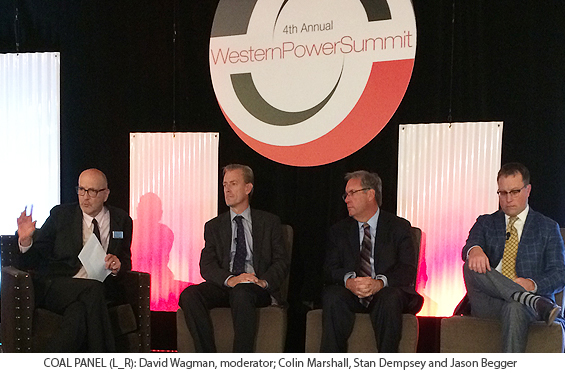 However, that situation may change with the Trump administration’s endorsement of the coal industry, and coal advocates say the endorsement and a better informed public may turn that around.

Colin Marshall, CEO of Cloud Peak Energy Resources, said the “demonization of coal” by alternative energy supporters claiming the burning of fossil fuel is the primary cause of climate change has been frustrating in recent years.

“Fifty percent of America’s power was provided by (coal-burning power plants) in 2008, and that’s about 30 percent now,” Marshall said.

Marshall was one of three coal industry advocates who took part in a session called “New Life for Coal in the Western Power Mix” at the 4th annual Western Power Summit that kicked off Monday in Broomfield at the Omni Interlocken Resort.

Also on the panel were Jason Begger, executive director of the Wyoming Infrastructure Authority, and Stan Dempsey, president of the Colorado Mining Association.

Dempsey blamed Colorado Gov. John Hickenlooper and the Democrat-controlled Legislature for developing public policies that have diminished the state’s coal industry and promote the use of alternative power sources such as solar and wind.

Dempsey noted that the state produced 30 percent less coal in 2016 compared to the previous year because of “poor policy decisions” on the part of state government.

Dempsey said Hickenlooper is out of step with the new administration, which has already started relaxing and repealing some national coal-related pollution rules.

“Governor Hickenlooper, while supporting of mines, is certainly suggesting Colorado take a different approach in the age of Trump,” he said.

After President Trump extracted the U.S. from the Paris climate accord signed under former President Obama in 2015, Hickenlooper announced Colorado would seek to attain similar clean air goals by joining the U.S. Climate Alliance.

Dempsey said the question now is what will Trump do to promote coal and how will he respond to states joining the U.S. Climate Alliance.

“It’s OK to have a conversation about (climate),” he said. “But how will the Trump administration deal with the 19 or 20 states that say we’re going to go our own way?”

Begger said Wyoming is in a precarious situation if coal continues to be shunned because two-thirds of the state’s revenues come from oil, natural gas and coal.

Begger said Trump’s election has given the coal industry “a little reprieve” to turn itself around.

“Now, we have at least a three-year reprieve to try to do something better,” he said. “We need to dedicate adequate resources and longer timelines to get us to where we want to be.”

Despite the Trump administration’s stated support for the coal industry, Marshall said he’s not optimistic that the industry will ever again be the fuel of choice for power plants.

“Utilities aren’t building any new coal plants,” he said. “The question is how long do we keep them open?”

But he said coal needs the kind of support alternative power sources like wind and solar have received from the federal government to help transform its image and continue to be a significant part of the nation’s power mix.

“I’d like to see some of the $12 billion going to wind and solar re-directed to coal,” he said. “There is a pathway forward.”

Marshall said that, while the U.S. market for coal has diminished in recent years, the international market is flourishing.

“The demand is fantastic in Asia,” he said. “Our coal has tremendous attraction.”

Begger said the answer to saving the U.S. coal industry lies in removing the issue from politics and partisan bickering.

“How do we overcome these political challenges and find reasonable solutions? By bringing in that reasonable middle and not be drowned out by the extremes is a huge part of what we need to be doing,” he said.

The Western Power Summit, which concludes Wednesday, is a three-day conference being attended by utility, industry and government leaders looking to find solutions to challenges facing the power sector in the Western U.S.

Tuesday’s all-day session will include a morning keynote by Gov. Hickenlooper, who will discuss the state’s clean power plan in light of the Trump-directed U.S. exit from the Paris climate accord signed by 196 nations.

For a complete schedule of the Summit, click here.