LOVELAND -- A trip to China was all it took to convince Ed VanDyne that his engineering skills might be put to better use somewhere other than the automotive industry.

“The particulate matter in the air during the day was about 200 parts per million,” he recalls. “The white building across the street looked orange-brown at noon time and you couldn’t see two blocks away. That’s when I decided I needed to get to work on this energy problem, because if all of the developing countries come on line using coal...the whole world is going to be covered in this smog.”

That was three years ago. Today, the results of VanDyne’s revelation are coming to fruition. As president and CEO of Wave Solar Technologies, VanDyne has developed an alternative system to harness and utilize the sun’s energy.

“It’s a steam engine for your house,” he explains. “And instead of using photovoltaic (PV) panels, we’re using solar thermal panels.”

And while it may sound like technology from a bygone era, this is not your grandparent’s steam engine.

“The efficiency of old-fashioned steam engines was between 15 and 20 percent,” according to VanDyne. “That’s no better than solar PV is today. What we’re doing to make the overall effectiveness better is creating a co-generating system.”

Which means that -- beyond just electricity -- the system will also produce heat, hot water and air conditioning for a typical home. And again, with a nod to throw-back technology.

“The leftover energy gets run through what’s called an absorption chiller, which is the original way they found out how to refrigerate back in the 1890s,” says VanDyne.

“So we’re taking 120-, 130-year-old refrigeration technology and applying it to utilize the waste heat off our engine.”

Looking to the future

But reviving century-old mechanical principles is more than just a quaint notion. VanDyne says it actually looks to the future.

“This past fall, based on the Paris accords, 110 countries have banned all hydro-fluorocarbons, which are found in all current refrigeration systems,” he notes.

“In the next 20 years they’re all going to go away, they’ve all been banned as bad greenhouse gasses, so we’re working on the ammonia chilling which is...what most of the systems will use in 20 years. It’s sort of coming back into favor.”

The solar panel itself is also much more efficient than current PV panels on the market, so the collection array is substantially smaller. Wave Solar also alleviates the problem of energy storage. Many PV systems require a sizable battery cluster on site in order to store electricity for those times when the sun isn’t shining.

But this new design includes a natural gas or propane backup system to supply the heat necessary for operation.

While still in the prototype stage, VanDyne expects the steam engine to be fairly unobtrusive.

“It’s also not a very complex system – the steam engine has a bunch of pistons, the pistons are using air cylinders, so they’re very basic, highly produced, off-the-shelf parts and so the real key to the payback is the fact that we can make this for a very reasonable price.”

“We think that’s a pretty good price relative to the fact that you get solar and you get a backup generator that could run all night if necessary,” VanDyne says.

That would be about half the upfront cost of a standard PV system, which solarpowerauthority.com estimates at between $25,000 and $35,000. And with an overall efficiency rating around 70 percent, VanDyne says the system would pay for itself in far less time. 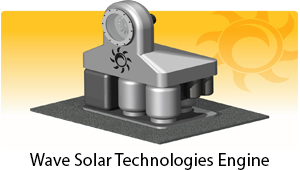 The company also plans to market a model adapted for developing countries, one that replaces the natural gas/propane burner with something along the lines of a pellet stove. This would allow for the burning of wood chips, manure or even garbage to provide backup energy.

VanDyne has impeccable engineering credentials, serving as director of research at Woodward for five years before spinning off VanDyne SuperTurbo in 2009. The company designs and develops equipment that improves the performance of diesel truck engines.

“We have one patent already filed, we have two more we’re planning on filing in the next month or so, as soon as we get some more investment funds, and we have five more in total we need to file in the next year,” VanDyne says.

In addition, some 18 home owners are on board for beta tests with the prototype system, scheduled for delivery in September of this year. Actual production for the commercial market is expected to start in the summer of 2018.