FORT COLLINS -- The drama at the CSU Blue Ocean Enterprises Challenge business pitch competition rose to a crescendo Saturday evening when the two final competitors – VerbalizeIt and Xtrude2Fill – were given an opportunity by judges to split the $250,000 grand prize. 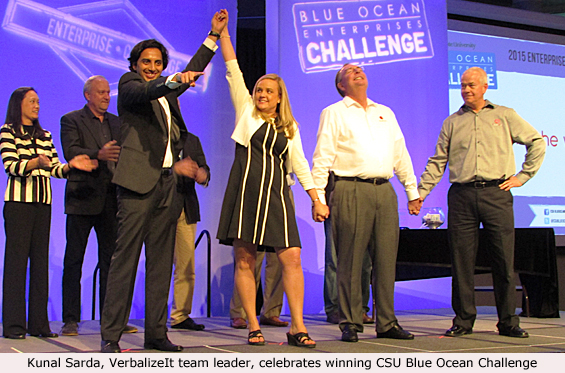 But after five minutes of deliberation among team members, both companies decided to take their chances on being the Challenge’s big winner.

“We have some real risk-taking entrepreneurs up here,” said Charisse Bowen, manager of Galvanize Fort Collins and moderator for the Challenge, when both voted “no” on accepting the judges’ offer.

“In business, it’s critical to get every word right,” said Kunal Sarda, VerbalizeIt co-founder and team leader, who said the company’s goal is “to create the first $1 billion translation company.”

Sarda said VerbalizeIt and its stable of 24,000 human translators in 150 languages has been growing 40 percent month-over-month this year and is in talks with Google and Facebook.

“We’ve got awesome traction and some amazing pilot projects in the pipeline,” Sarda said.

Loveland-based Xtrude2Fill, a company that manufactures machines and tooling for extrusion-based parts production, found itself taking home the $25,000 second-place prize as both teams posed for photos at the end of the two-day competition that saw 15 teams compete head-to-head on the CSU campus.

The competition included Native, a University of Colorado-based startup that won the $20,000 grand prize in the Collegiate Challenge on May 27.

In addition to VerbalizeIt and Xtrude2Fill, making it into the semi-finals of the Enterprise competition on Saturday were Jebbit, a Boston-based digital marketing company, and Fort Collins-based OptiEnz Sensors, which makes biosensors for measuring organic chemicals in real-time.

The Space Research Company from the University of Colorado, which makes small satellites for space-based research, was awarded the $1,000 second-place Trolley Pitch prize.

CSU’s Wise Art Food, which makes and distributes functional foods to retailers and website consumers, was the popular favorite in the “Invest-in-Me” competition and grabbed the $2,000 cash prize.

About the Author: Steve Porter