FORT COLLINS -- There are many ways to raise funds for a startup company, but the bottom line is the company must first have a commercially viable product or service and – above all – a solid business plan. 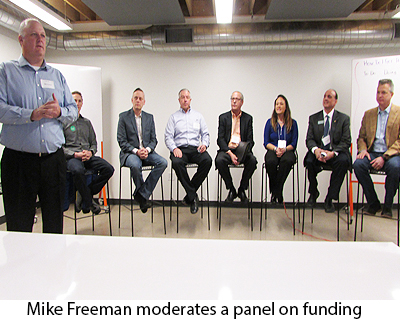 That message was emphasized Friday during a panel discussion on “Finding Your Funding” on the last day of the third annual Fort Collins Startup Week.

For every startup entrepreneur, panelists said, the inescapable reality is there will be no business without money to get it rolling.

“You get an inspiration to solve a problem, but all of that evaporates behind the reality that you need money to execute it," said Gustav Hoyer, whose company -- MyChoiceMD -- is now being incubated at Innosphere.

Hoyer said figuring out how much money will be needed is a much needed reality check.

“The cost exercise is incredibly humbling because it forces you to ask the tough questions,” he said.

Finding the answers to those money-based questions is essential before pitching an idea to a bank, a grant agency, an angel investor or venture capitalist.

“Before you can talk to anybody, you have to have a financial model that is credible,” Freeman said. “You need to look ahead two to three years to figure out how much you will need, because at some point you’re going to need investors.”

For certain startups that fall into proscribed advanced industries, the state of Colorado has an Advanced Industries grant program that can provide hundreds of thousands of dollars to get them from the starting gate to investor-ready.

“We fund that valley of death before an angel comes in,” said Katie Woslager, AI program director, noting that the program annually provides between $2-$3 million a year to qualifying companies.

Investor Brad Florin, partner at Fort Equity, said startup entrepreneurs must come to the table with a definite, long-range business plan to get angels interested.

“An angel investor really can’t fund an idea,” he said. “They need to see a three-to-five-year plan. Where are you going, and what are the milestones you expect to achieve? A lot of people just fly blind.

“You have to have a concrete plan: Who will you hire? Who’s full-time, who’s part-time. And what are the milestones?”

Ryan Stover, a co-founder of Community Funded, said some early startups can benefit from a local crowdfunding campaign.

“Crowdfunding has really opened some exciting opportunities for people who might not be ready for some of these other (funding) sources,” he said.

“It can be a really compelling way to share your story and get some starting money. It provides another opportunity that really wasn’t available five years ago.”

Fort Collins Startup Week 2016 wrapped up with a panel discussion of local startup companies sharing their stories of how they achieved a level of success. 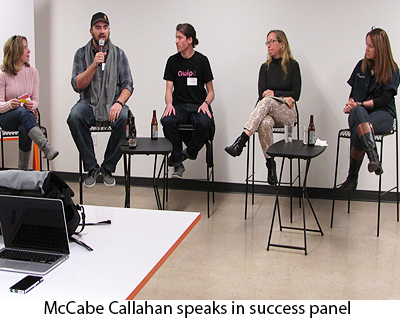 Christine Hudson, a board member of Startup Colorado and co-organizer of this year’s Startup Week with Charisse Bowen, Galvanize Fort Collins campus director, moderated the discussion with panel members recalling their entrepreneurial journeys and what they had learned.

Kris Boesch, founder of Choose People workplace consulting, said it takes time to get to where it feels like a success milestone has been reached.

“It takes about three years before people start to recognize you for what you do,” she said. “It’s not a piece of cake. And you need to establish credibility, because you won’t have it when you start.”

Asked what advice he would give to startup entrepreneurs, McCabe Callahan, founder of Mugs Coffee Lounges and co-founder of Community Funded, said being true to oneself was the best guidance he could offer.

“You have to learn to make the right decisions down the road,” Callahan said. “Know yourself, know your values and stay true to them and the right things will happen.”

Maureen Boyt, founder of Leapin’ Lizard Labels, said she recommended having the best people they can find to help them.

“Make sure your life partner is all in with you,” she said. “Entrepreneurship is Mr. Toad’s wild ride. My husband was an absolute rock through this.

"Have people around you who say you’ve got this. This whole thing for me was a journey to self-actualization.”

The third annual Fort Collins Startup Week was a departure from the first two Startup Weeks, which were held during the last week of May. A snowstorm on the first day of the week resulted in some events being re-scheduled or cancelled, but co-organizer Hudson said she was sorry they were because a significant number of people showed up despite the inclement weather.

“We learned the community was really passionate and willing to trudge through the snow to get here,” she said.

Hudson said she was very happy with how the week played out.

“We had three to four times the number of people we expected for a grassroots event and more than 40 sessions than we expected to have. What I really loved was seeing the age spread of all the participants, with one that I know of who was 75,” she said.

Hudson credited the collaboration that organizers received from a wide variety of supporters – including the city, CSU, Galvanize, Techstars and Startup Colorado – for much of the success of the event, which she looks back on with pride.

“I just feel amazing about this week,” she said with a huge smile.