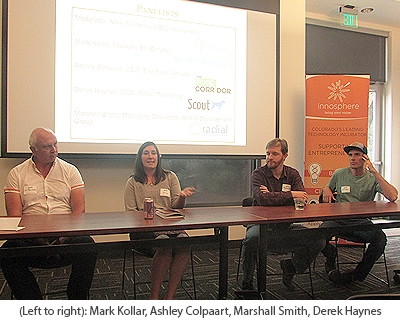 Raising money, finding the right talent, meeting the best mentors – those were some of the issues discussed Thursday when the Tech Tour visited Northern Colorado on its weeklong tour of the state.

The tour kicked off Monday in Colorado Springs, moved to Frisco and the Colorado high country on Tuesday, visited Grand Junction Wednesday and arrived in Fort Collins on Thursday with a presentation at Innosphere.

The tour concludes today in Longmont.

Ashley Colparrt, founder of The Food Corridor, said her non-tech background made it essential to find someone who could help her navigate the startup world.

After convening an advisory board, Colpaart said she was able to locate that person.

“I was astonished to find a co-founder who had the same things that drove me,” she said.

Mike Freeman, Innosphere CEO and moderator of a panel discussion highlighting local startups, said that was likely part of the reason The Food Corridor became profitable in a relatively short time.

“Finding that right co-founder is a key ingredient to success,” Freeman said.

“A lot of stuff we do is unique, and finding good people is never easy,” he said.

“Fort Collins is built around giving people a great quality of life so they can do awesome things.”

Raising money to start a company and get a product onto the market can often be a long and sometimes scary process.

Mark Kollar, founder of St. Renatus, said he mortgaged his house and business and sold everything he could to raise the money he needed to launch his company’s needle-free dental anesthetic.

“When you’ve sold everything, that’s when you know you’re all in,” Kollar said.

It took 10 years to finally obtain FDA approval of his product in June, Kollar said, noting that he raised $78 million after presenting his idea to 8,000 people during that period.

Haynes said while Northern Colorado is “not the best place to raise money,” he was eventually able to bootstrap the funding he needed.

“What a deal that’s going to be from an acquirer’s perspective,” he joked.

Kollar noted that one thing he‘s learned is that – even after obtaining a patent – it must constantly be defended.

“People keep coming at you and your patent, so you have to keep updating it to stay ahead,” he said.

Andrea Young, CTA CEO, said the idea behind the Tech Tour is to be a sounding board for the state’s technology industry.

“We want to put Colorado tech stories on the map,” she said. “There’s a lot of tech success going on all across the state.

“We’re on a listening tour to find out what we can do for you in the future.

“We’re hearing lots of great stories for us to be telling about,” Young said.