LOVELAND -- Northern Colorado, more than ever before, is attempting to speak with one voice and act collectively as a region but still needs to do more to maximize its combined impact, according to city and business officials at a Loveland Startup Week panel on Friday. 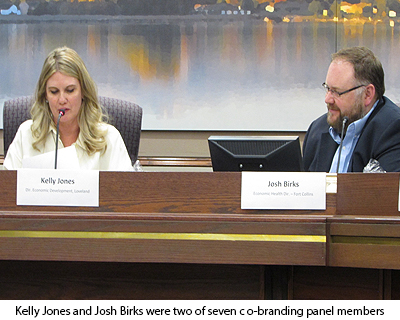 Seven representatives of Northern Colorado cities, chambers and economic development organizations discussed the progress that has been made in recent years in overcoming local rivalries and working together on common problems such as improving transportation and attracting primary employers.

But all agreed that more could be done to increase the effectiveness of those efforts -- particularly in adopting a strategic plan for the Northern Colorado region.

“There is no strategic plan,” said Josh Birks, economic development officer for the city of Fort Collins. “But I do see that individual communities are starting to work together to address these challenges.”

“It doesn’t exist right now,” added Roy Otto, Greeley’s city manager. “I think there are fledgling seeds for a regional council of governments that might be able to do that.”

Panel members acknowledged that Denver’s long-time regional organization DRCOG, the Denver Regional Council of Governments, could be a possible template for a Northern Colorado COG.

Panel members agreed that continuing rapid growth in Northern Colorado is exacerbating perennial problems of keeping up with infrastructure demands that include water supply, housing availability and affordability, broadband access, and especially transportation as local roads and I-25 become more choked with traffic with each passing year.

McCloughan said adding another lane to I-25, for example, is especially vexing as current estimates call for $1.8 billion to construct that project with the state unable to raise that kind of money due to the Taxpayer Bill of Rights (TABOR) and other financial constraints.

“I can tell you that is a really hot issue for everybody, and it’s not just I-25 – it’s all of our major highways and byways,” McCloughan said, noting that maintaining a viable transportation system is the “top priority” for the region and “imperative to the success of our businesses.”

Johnson noted there have been notable recent examples of Northern Colorado communities working together to overcome obstacles, such as Windsor and Fort Collins sharing the cost of reconstructing the I-25 and Highway 392 interchange.

But a new spirit of cooperation is now showing promise of more regional collaboration ahead, with the recently-formed Northern Colorado Economic Alliance as an example of that support.

“The Economic Alliance was formed to represent Northern Colorado as a region,” said Atchison, NCEA’s CEO. “I really think we are becoming a region. We have had business leaders in the region meeting directly together in 2014 and 2015 for the first time, so things are changing.

“We’re starting to think about what’s good for all of us. What we have to do is start thinking of ourselves as a brand and marketing ourselves that way across the country.”

Birks pointed to a regional Code of Ethics agreement that aims to keep Northern Colorado communities from attempting to lure employers from one community to another.

“We’ve all agreed we’re not going to poach each other’s business,” he said. “You need to express that trust sometimes in black-and-white ink, and I think that’s been huge.”

Jones noted that Northern Colorado is gaining a reputation as a place with high innovation output, which is helping to attract young entrepreneurs and startups to the region.

But she said talented entrepreneurs and successful companies are no longer coming simply for the “quality of life” in Northern Colorado often cited in past years, and it will take more than that in the future.

“People always think we win these companies because of our quality of life, but lots of places have that.”

Jones said one of the best things about Northern Colorado is that it’s a place that’s neither too big nor too small – creating an environment where business owners and government officials can get to know each other socially and establish trusting relationships.

“There’s a consistent and conscious effort to keep building on these relationships as a whole,” said Otto.