LOVELAND -- Doing business in a foreign country can be a minefield of cultural missteps that could derail a successful relationship unless those missteps can be avoided.

That was the focus of a Loveland Startup Week panel on Friday called “Navigating the Cross-Cultural Business Swamp: How to Avoid Cultural Crocodiles.” 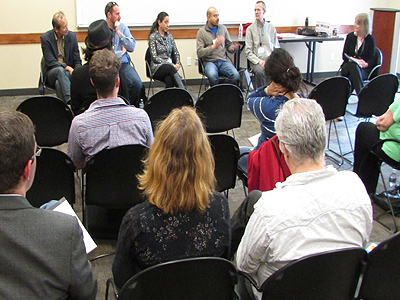 The panel, moderated by InnovatioNews Publisher Lee Porter, included Northern Colorado citizens who grew up in other nations and Americans doing business overseas.

Panelists highlighted some of the cultural differences that can make or break an ongoing successful business venture unless the business owner can avoid committing a cultural faux pas.

Todd Cornell, a local business owner, spent 20 years in China and learned there are many differences between Chinese and U.S. culture.

Engell said sometimes business must be conducted through a “back channel” with local officials who control what gets done and what doesn’t.

“It took me a long time to figure out the rest of the world doesn’t always work in that linear process.”

Panel members who grew up in foreign nations said those countries often have a completely different idea of what signing a contract really means.

While in America it is a binding legal document, in other places it doesn’t hold that same effect.

“In Japan, signing a contract is just the beginning,” said Denny Otsuga, who grew up in Japan and now lives in the U.S. but still does business with his native country.

Engell said the same is basically true in the Middle East.

“We basically sign a document that says we’re willing to work toward a shared goal together,” he said.

Contracts can also vary dramatically in terms of their simplicity.

Roni Diaz-Block, a native of Mexico who now lives in the U.S., said when she had a wedding planner business it was much easier in Mexico to create a contract.

“In Mexico, I had a one-page contract – very simple,” she said. “But 80 percent of my customers were from the U.S. and they needed a seven-page, double-sided contract that included every single detail.”

Amit Munshi, a native of India, said contracts are not looked upon favorably in that densely-populated nation that is 1,000's of years old but only gained its independence in 1947.

“I wouldn’t trust a person ever with a signed contract,” he said, noting that contract court cases can get backed up for 25 years.

Trust and honesty in business exists in other nations, but one has to be very careful and not be too trusting, panel members said.

“There basically is not honesty and you basically can’t trust anybody in China,” said Cornell. “That’s just the way it works and how you deal with it.

“If a person goes into a relationship not trusting, they’re more likely to be successful.”

Otsuga said Japanese people are “just the opposite” of Chinese when it comes to trust.

“There’s so much shame attached to not being trustworthy,” he said. “It creates an almost too-trusting society.”

Knowing the right way to bow to a Japanese person is very important, along with making limited direct eye contact, said Otsuga.

When it comes to gender equality, other nations are literally all over the map, panelists said.

Munshi said in India it all depends on where you look. In some parts of the country, women have virtually no role in society while in others they have the last word on family and business decisions.

“Fortunately, over the last 40 years or so that gender difference has been disappearing,” he said.

“In the big cities, you have women having the same opportunities in education and the professions,” said Diaz-Block of Mexican women.

“But in the parts where there is a lot of poverty, women are treated like second-class citizens.”

Cornell said one positive outcome of the Communist revolution in China in the 1960s has been a lessening in gender inequality.

Humor is another potential minefield when it comes to doing business in a foreign nation. Something as seemingly simple as laughing can be misinterpreted and humor should be used sparingly unless the relationship is strong and established.

“Humor in China is very difficult to understand,” said Cornell. “Trying to be funny in China is not easy because our world views are so different.”

“For companies that are or want to do business overseas, cultural sensitivity can make or break their success,” she said.

“By learning more about how these cultures operate, we can take advantage of global opportunities.”