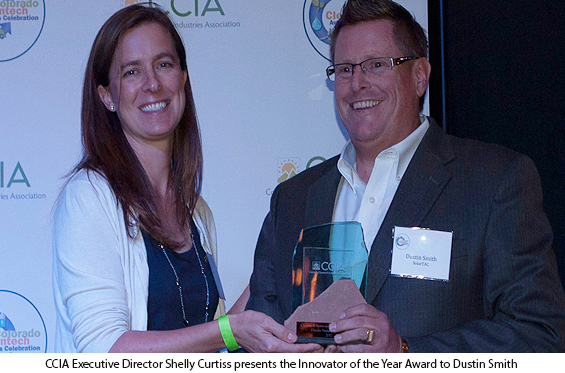 SolarTAC, which opened in 2011, is a world-class facility for demonstrating and validating the most advanced solar technologies now available.

Under Smith’s leadership, the 74-acre site is about to add “GridNxt,” a test bed for solar-enabling products and components that will give organizations the ability to cost effectively test new technologies without having to build a working micro-grid from scratch.

In accepting the award, Smith said earning it was hard “but you don’t do it alone but with hundreds of people rowing in the same direction.”

Smith said GridNxt is expected to finish its final construction “in about 20 days” and he invited the curious to come and visit to see what it can do.

Cleantech Open is a global accelerator for early-stage tech startup companies in the cleantech space.

Shelly Curtiss, who has served as CCIA’s interim director for the past four months following the departure of former Executive Director Chris Shepard, was officially named permanent director during Wednesday’s festivities.

Curtiss said this year marked another year of celebrating the state’s best cleantech companies and the jobs and economic vitality they bring to the state.

“The winners are great every year,” she said. “We are so fortunate to have such a great cohort of companies, and they all support each other. It’s a great spirit of collaboration.”