SPARKS, Nev. -- Sierra Nevada Corporation’s (SNC) hardware is once again on its way to Mars, this time aboard NASA’s InSight Mars lander.

SNC’s actuators are a critical component on the robotic arm of the vehicle that launched May 5 from Vandenberg Air Force Base on the California coast.

“We are proud to provide another critical hardware component for a Martian mission,” said Mark Sirangelo, executive VP of SNC’s space systems business based in Louisville.

“Our actuators on the deployment arm will support several of the InSight science instruments. We’ve provided hardware on multiple Mars missions, including several landers and all of the rovers, and we’re looking forward to the data that Mars InSight will provide.” 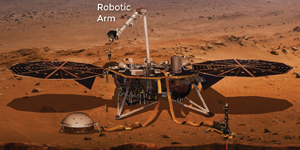 SNC supplied actuators in the grapple mechanism on the 2.4 meter-long Instrument Deployment Arm (IDA), which will be used to place the seismometer and heat probe instruments on the Martian surface.

The InSight mission aims to study the inner core, mantle and crust of Mars and discover previously unknown data about the planet.

“Our engineers are building hardware that can survive harsh environments in our solar system and our equipment has performed flawlessly for mission critical operations,” said Bryan Helgesen, director of business development for SNC’s Space Technologies business unit.

“SNC is building equipment that can withstand the shocks of launch and landing, extended duration radiation, and extreme temperature conditions, among other challenges.”

The grapple on the robotic arm helps secure each piece of hardware the arm lifts with its five mechanical fingers. The IDA will place a seismometer on the Red Planet’s surface to detect Marsquakes and also will release a probe that digs five meters down into Mars’ interior, deeper than any previous mission.

SNC has been a part of more than a dozen missions to Mars. Teams in Louisville and Durham, NC helped make the equipment for the InSight mission.