DENVER -- The world can be a scary place. There are bad people out there who want to hurt you, rob you or worse. Removing this fear and adding a layer of security is the inspiration behind one entrepreneur’s business and her product, Revolar. 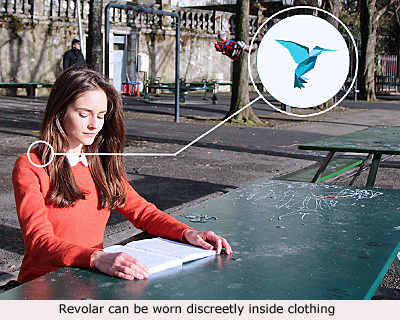 Jacqueline Ros was motivated to create something that could instantly and discreetly help people in trouble send a distress signal to their loved ones. Her sister was her inspiration. Sadly, she was attacked twice by the time she was 17, and Ros couldn’t stop thinking, “If only she could have pushed a button to ask for help, everything would have been different.”

So, that’s what she set out to do – make that magic button a reality.

Revolar is a discreet personal safety device -- no bigger than a quarter -- that is hidden under clothing. If a person is in a situation where they feel threatened or are being attacked, they can just press the button and an emergency alert message will be sent to their personalized list of contacts -- including GPS notifications of their location -- which is updated every three minutes.

Ros, a newly minted entrepreneur, turned to Kickstarter for funding and easily beat her goal of $75,000 – with investors kicking in nearly $85,000.

Community builder and digital health entrepreneur Mike Biselli (who recently launched Catalyst, a health technology innovation campus in north Denver), is one of the many financial backers of Revolar’s Kickstarter campaign.

“They are in a very unique space, and their ability to provide delivery of a product to the marketplace is very timely,” he said. “As we see news of assaults on college campuses continuing to increase, it’s apparent that there is a huge need for this across the nation.

“They are helping to solve a pervasive problem. They are already positioned as a leader in wearable technology and digital health. And, with the fact that it’s a wearable, and an elegant design, well, they really nailed it. It’s incredibly unique in the marketplace.”

Ros, a former primary school teacher with Teach for America, joked, “This is my first business, unless you count lemonade stands as a kid.” So she surrounded herself with excellent team members who brought the skills and experience she didn’t have.

She also noted that the entrepreneurial community in Colorado is incredibly supportive of each other, and she learned a lot from those who were willing to share their knowledge and experience.

“Oh man, it was messy at first,” she said, referring to the process of developing a prototype. “I spent about six months interviewing engineers. I’m not an engineer, so I didn’t know exactly what to look for.”

She said the experience was an eye-opener because some engineers were nervous about signing disclosures. Others were uncomfortable hearing the back-story to the product’s creation.

“One of my partners said to me, ‘Jackie, do you realize that it made them nervous to talk to a young woman about sexual assault?’” Ros said that thought hadn’t crossed her mind. But soon after she made the right connections, and the project began to blossom.

Ros expects to launch 1,200 units in early 2016. Her goal is to provide enough units initially to fulfill pre-orders. “Our focus is on getting the product to our first customers. We want to launch this, get it off of the ground, and we’re really excited to continuously innovate,” she said.

The price point for early orders will be around $80, and no more than $100 at retail. Ros said she is emphatic about manufacturing the Revolar in the United States and is currently looking at several manufacturers in Loveland and Northern Colorado.

“We definitely want to manufacture it in the U.S. because it’s about quality,” she said. “We want to be able to test every single item before it goes out. It’s a personal safety device, so it’s about trust and our consumers need to trust that it will work every time.”

While there are other personal safety devices currently on the market, Ros rattles off a list of features that make Revolar stand out from the competition.

Some brands are embedded in jewelry, which Ros says is limiting because jewelry is such a personal taste. “I don’t know anyone who wears the same jewelry every day,” she said.

Another selling point is the long-life battery, which lasts about a year. “We already have so many things to remember to charge, we don’t need one more thing to remember,” she said. 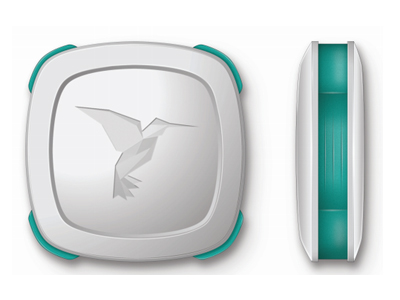 A third is the discretion factor. The button can be pushed without the attacker knowing the victim is sending a message for help. “There are several apps out there, but what are you supposed to do? Tell your attacker, ‘Excuse me, I need to turn my cell phone on, activate my app and alert someone.’ It’s just not reasonable,” Ros said.

The device is not prewired to dial 911, but it can be implemented with a small subscription fee. The reason, Ros said, is twofold: First, 911 can currently only accept live calls. Second, there may be instances where the user doesn’t want to involve the police. “Perhaps a young college woman is out for the night, becomes inebriated, and really just needs her friends to come get her,” she notes.

Another reason is that victims of sexual attacks may not be ready to report an incident immediately.

“It can be a divisive issue to report to the police,” she said, noting that her sister didn’t tell anyone when she was first attacked at the age of 14.”I would have been livid if my sister was forced to report it sooner than when she was ready.”

Her sister, Ros said, is now one of Revolar’s biggest proponents. “When I told her my idea, she had such a strong reaction,” she said. “She just began to cry, and she said this would have made a difference. By far, she is the biggest fan of the product, and so is my mom.”

Revolar means “to take flight again” in Spanish. With the introduction of this new product in 2016, Ros said she hopes that’s exactly what so many people who once lived in fear will be able to do.

About the Author: Amy Kegg

Amy Kegg is a communications consultant with more than a decade of experience in public  relations. An award-winning journalist and PR pro, Amy holds a master's in Communication from the University of Northern Colorado and a bachelor's in Technical Journalism from Colorado State University. She can be reached at [email protected]